Microsoft is all set to begin sending out the free Windows 10 upgrade next week, but that doesn’t mean everything users need will make it to users PCs then. This week leaks and reports revealed another new Windows 10 feature that Microsoft plans to deliver. We knew the company was killing off its Skype app in the Windows Store. We didn’t know that officially that it planned to replace it with dedicated Phone and Messaging apps that build off its Skype platform.

The torrent of new information about this new feature started when Microsoft released a video promoting all the new multitasking features that users can expect after they download the free Windows 10 upgrade. In that video you can see the new Action Center notification area and some apps that use it effectively. At the top of the Action Center in the video sits Messaging, an unreleased app that lets users communicate through Skype. 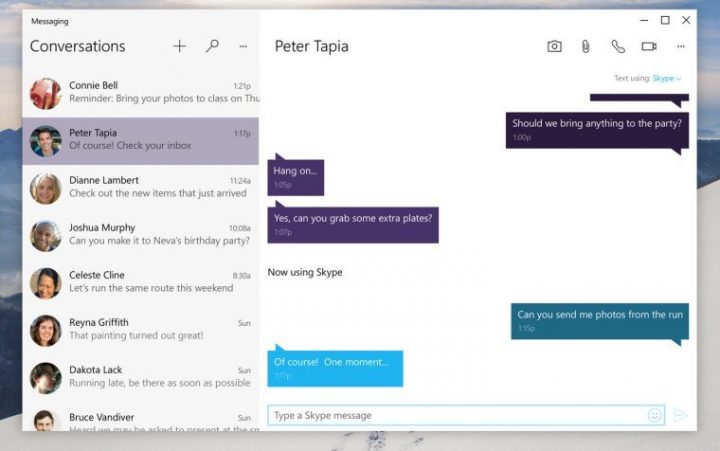 To be clear, Microsoft has mentioned the Messaging app before, but only at showcases as a concept. It’s not available in any version of Windows 10 that Microsoft has shared publicly with its Windows Insiders Program. We haven’t seen pictures or video of the Phone app that’s coming, but Microsoft confirmed its existence today with an update to a blog post it wrote about killing off the Windows Store version of Skype.

Skype says that, “later this summer [it will] roll out the Preview for Universal Skype experiences built into Messaging, Phone and Video apps on Windows 10.” Elaborating on the purposes of these apps a bit more, the post says that “these new, lightweight apps will make tasks like calling and messaging more efficient and easier.”

That Microsoft has these apps planned is huge news for Windows 10 users. If there’s one thing the company lacks now it’s a cohesive calling and messaging system. Facetime and Google Hangouts are both hugely successful and well known. Beyond video calling and messaging, Apple iMessage platform lets users send and receive text message away from their phone. Any messages and calls they receive are routed directly to their device.

Microsoft purchased Skype back in 2011, but has done a rather poor job of integrating the service, even though it’s one of the most popular services the company owns. The possibilities are endless with these new apps. Phone and Messaging could allow Windows users to make phone calls and send text messages directly from their Windows 10 device to a Windows 10 smartphone, for example. At the very least it’ll give users an integrated way to place phone calls and send messages to other Skype users. Skype users can call other Skype users for free, but calling landline or smartphones requires Skype Credit or a monthly subscription.

Today, the Skype experience on Windows notebooks, desktops and tablets is pretty bad.

The timing for these apps is purposely vague, but the summer ends in the United States in late September. That gives Microsoft roughly two months to make these apps available to users. In the past we’d have to wait to get a feature this important, but Microsoft now treats Windows as a service. Starting with the Windows 10 update It’ll add features and options at a faster pace then we’re used to. Besides Skype, Microsoft also owns the Qik messaging service.

Microsoft began letting users reserve copies of the free Windows 10 upgrade about a month ago. Members of the Windows Insider Program and those that reserve early will get the update first. It’ll go out to more users each day until it’s generally available for those who didn’t reserve a copy.  Versions of Windows 10 will power smartphones, notebooks, desktops and tablets.