Two of the biggest smartphone releases of 2012 have been the Motorola Droid 4 and the Motorola Droid RAZR MAXX for Verizon but it seems the carrier isn’t content as evidence has surfaced today indicating that another Droid release could be on the horizon. Droid-Life has leaked a document that mentions two brand new smartphones headed to Verizon. And while we don’t have details, we have names: Droid Fighter and LG Cayman.

As of right now, both phones remain an absolute mystery as the document reveals nothing besides the phones names, we assume that these are code names, and some dates that may or may not be release dates.

The LG Cayman is listed next to March 29th and the Droid Fighter is listed beside April 12th. It’s possible that both dates are indeed release dates for the devices as they both fall on Thursday, a day that Verizon has used for smartphone launches in the past. 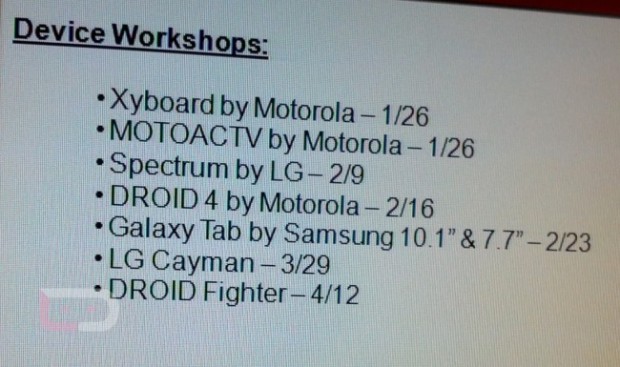 We should also note that the Droid Fighter doesn’t have a manufacturer in front of it. So that means it could be a Droid from either HTC, Motorola or Samsung, all of which have released Droid-branded phones in the past.

The only guesses that we have right now are that it could be that mystery HTC phone that leaked out a couple of weeks ago, showing off a Droid Incredible style design and its Android 4.0 operating system.

It could also be a follow up to the Samsung Droid Charge which was released in May of 2011. Or some kind of tablet.

Both devices are listed along with some high-end phones so it’s possible that the Droid Fighter will be Verizon’s next big Droid release while the LG Cayman, well, might be the LG Cayman.