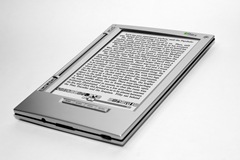 I really enjoyed the time I got to spend reviewing the iRex Technologies iLiad ebook reader. (InkShows 1 and 2)At the time of the review the iLiad 2nd Edition was the only available model, but today, iRex announced the new iLiad Book Edition, launching on May 9.

One important feature that stayed the same – it still includes a Wacom digitizer. Despite the rampant use of the words “touch screen” on many sites to refer to the digitizer, it is indeed a standard Wacom. It apparently still does all of the annotations and ink notes that I reviewed on the older model. It also still has the bigger, better screen than the Amazon Kindle or the Sony Reader. The case was also changed from black to silver. Wow.

iRex has also announced that the iLiad Book Edition will be carried by Border UK. No word about the US, but that would certainly be an interesting development.

Other coverage on TeleRead, MobileRead, Engadget