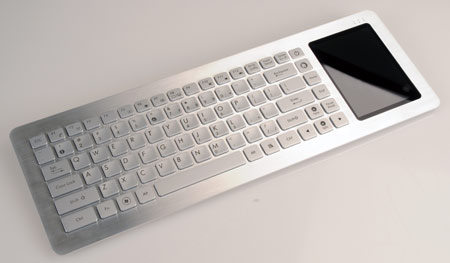 The folks over at ASUS have been teasing us for some time about their new Eee Keyboard.  The idea behind this device is that it will be a self contained computer (with netbook-like technical specifications) that is a keyboard. The Eee Keyboard connects to a TV or monitor over a wireless HDMI connection, connecting like a typical wireless keyboard . From this keyboard you can web surf, watch YouTube and other functions. The keyboard also has a built in touchscreen LCD, but it’s not large enough to function as a primary display. Instead, it’s a secondary display that you can use to launch applications and load widgets such as a weather app.   The entire set it is similar to the old Web TV set up that was around many years ago.

Here is the new video on the Eee Keyboard:

There is no word yet on pricing or availability, but at least ASUS is trying to get a buzz going on the device before it comes out to the public. Will this device catch on? Is there a market? Well, considering there wasnt a market for the iPad until a few days ago, anything is possible.