Users are eager to try the new iOS 9.1 emoji that are coming to the iPhone later this year — including a middle finger emoji — and many are buying the New Emoji app that promises, “New iOS 9.1 Emoji stickers” at 50% off for a limited time.

Apple just released iOS 9.0.2 to users yesterday and the iOS 9.1 release date is potentially a month or longer away.

With the update we will see a number of new iOS 9.1 emoji including a middle finger emoji, burritos emoji, unicorn emoji and others.

In the app description and screenshots we see proclamations that this app includes, “New iOS 9.1 Emoji stickers” and emoji art. 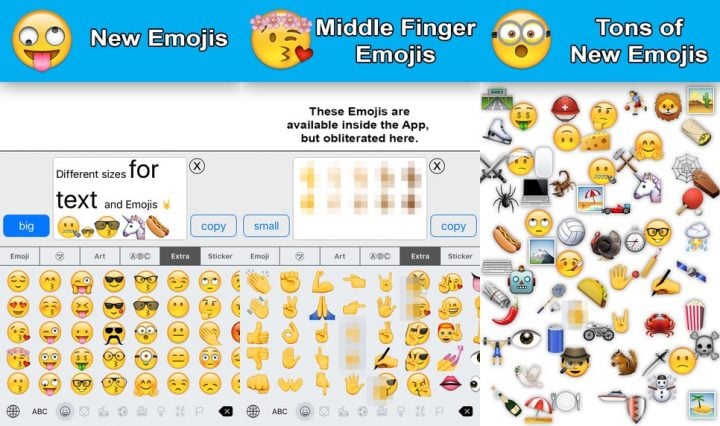 This app promises early access to iOS 9.1 emojis, but users should read reviews.

The New Emoji – Extra Emoji Stickers app is the number five most purchased app in the iPhone app store today, and it has been in the top 100 apps for over two months according to App Shopper.

Many of the user reviews are from frustrated buyers who assumed that this purchase would offer early access to the new iOS 9.1 emoji in the normal keyboard, or at least that would send as a text.

Berzins17 writes, “App tells your it has all these new emojis that you can use but it doesn’t have anything. The middle finger emoji and everything else is sent as a picture not as a text.”

Many of the other reviews echo this complaint, and even when looking at the all time reviews the average rating only climbs to 1.5 stars.

To be fair, the App’s creator does indeed tell users that they cannot use the new iOS 9.1 emoji like normal emoji, it’s just hidden away in the “more” section of the app description where the developer states, “IMPORTANT: The extra emojis, stickers and color messages can only be send as images! Only the regular emojis can be send as text.”

From the looks of the reviews, not many users read this part of the app description. If you do want a refund for this app or any other app, you can use iTunes on your computer to request a refund.

Log in to iTunes -> Click on your username -> Purchase History -> Choose the purchase -> Report a problem and explain what is wrong.

Here’s a look at what you need to know about the iOS 9.1 update. You can use this guide to get iOS 9.1 early.