Sprint confirmed a new Samsung Galaxy S3 color is on the way to the carrier, even though the unlimited data carrier has yet to talk about a Sprint Galaxy S4 release date or pre-order.

Aside from the color change, there is nothing new about the Samsung Galaxy S3 sprint will soon unleash upon stores and the online sales portal. 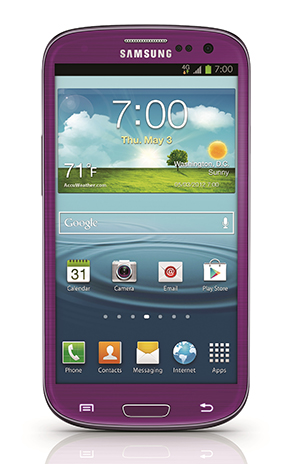 The Samsung Galaxy S4 is expected to land on Sprint’s network in the near future, which makes a push for a purple Galaxy S3 one that could fool shoppers into buying last year’s technology, and locking into a two-year contract with it.

Sprint already offers the Samsung Galaxy S3 for $99, which would be a great deal if a new model wasn’t already announced and coming to competing carriers at the start of May.

The Samsung Galaxy S3 features a 4.8-inch display and sensors that can tell when a user is looking at the screen which allows it to keep the display awake. Samsung is planning to bring some of the Samsung Galaxy S4 features to the Galaxy S3, though it did not confirm which features will make the cut. One potential feature might be Smart scroll, which combines motion and eye-tracking ot scroll without touching the screen.