The Gmail iPhone app is now much faster and optimized for iOS 7 to get your messages to you quicker while using an iPhone.

In the new Gmail app for iOS 7 users can expect, “no more annoying pauses” thanks to the app’s ability to use Background refresh to get new messages faster.

To take advantage of the new Gmail for iPhone app users will need to make sure Background Refresh is on and will need to turn on some kind of notifications according to Google. 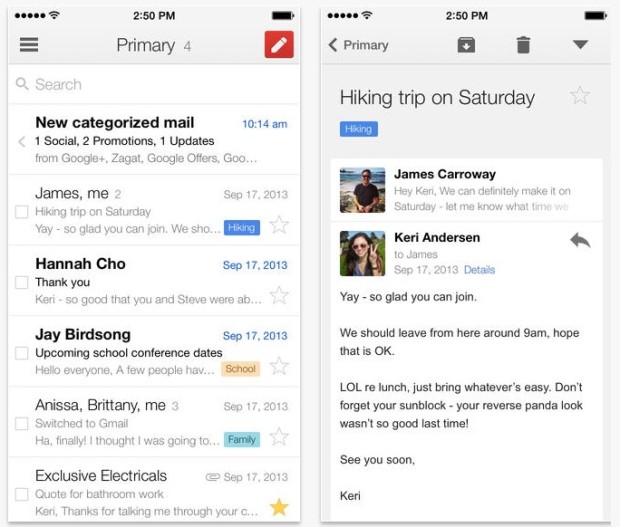 The new Gmail iPhone app allows users to get messages without waiting for the app to load them after it opens.

In addition to showing messages faster, the new Gmail app for iOS 7 now lets users sign in to other Google apps without remembering a password or using two factor authentication. After signing in once with the right information users who install another Google iPhone or iPad app can see the account as an option to sign in with.

The new Gmail iPhone app for iOS 7 works on older versions, but users will need iOS 7 installed to take advantage of the background refresh feature. There is also a new look for the app, though the changes are not as noticeable as the new iPhone and iPad Hangouts app that Google released recently.

To ensure the snappy Gmail for iPhone experience go to Settings -> General -> Background App Refresh -> turn it on and turn it on for Gmail. This may already be on for both by default.

Google also says that users need notifications turned on. To do this go to Settings -> Notification Center -> Gmail -> turn some form of notifications on using the settings on this screen. This can include just the badge and does not need to include pop ups or sounds.

The new Gmail iPhone app is available now for free in the iPhone and iPad App Store. Users who already have it installed should see it arrive as a free update and if the settings are correct they should notice the faster access to messages the next time they open the app.