News of the new Harry Potter and the Cursed Child’s release came yesterday in a press release sent out by Scholastic in the United States. The first seven Harry Potter books tell the story of an orphan boy wizard living among relatives with no powers of their own. The whole adventure kicks off when he begins receiving letters from a mysterious school. 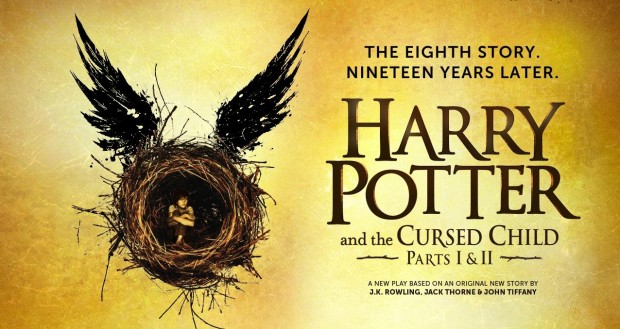 Harry Potter and the Cursed Child’s will arrive on store shelves on July 31st of this year, that’s actually the Harry Potter character’s birthday in the book series. Rather than dive into what happens immediately after the last entry in the series, writers J.K. Rowling, Jack Thorne and John Tiffany take the play in an altogether different direction.

Images included with the press release confirm that Harry Potter and the Cursed Child is a continuation of the story, but nineteen years after we last visited the Wizarding World in general. The promotional material also makes it very clear that the book is to be considered a main part of the series, with “The Eighth Story” stamped across the top to drive the point home.

The book will arrive at the same time as the Harry Potter and the Cursed Child play has its world premiere in London. J.K. Rowling faced criticism recently for announcing she’d write the play, but not giving fans around a world to read the story for themselves.

“It was always difficult being Harry Potter and it isn’t much easier now that he is an overworked employee of the Ministry of Magic, a husband, and father of three school-age children,” the teaser included in the press release begins.

“While Harry grapples with a past that refuses to stay where it belongs, his youngest son Albus must struggle with the weight of a family legacy he never wanted. As past and present fuse ominously, both father and son learn the uncomfortable truth: sometimes darkness comes from unexpected places.”

How much the Harry Potter and the Cursed Child release will cost you ranges. Book stores will begin selling Harry Potter and the Cursed Child in physical form on July 31st for $29.99 and $39.99 in the United States and Canada. Rather than wait years this team, digital versions of the book will go on sale at Pottermore, the official online website of the franchise on the same day.

Due to the nature of places there’ll be a Special Rehearsal Edition and a Definitive Collector’s Edition, with the latter replacing the former after script rewrites and adjustments for the play are complete. Amazon shows digital pre-orders of the book costing $14.99 directly from Pottermore. The site is the only way to get access to the book series in digital form, though the books work on Kindles and other eBook readers effortlessly.

All told, it’s going to be a very interesting year for new Harry Potter releases in general. Besides the Harry Potter and the Cursed Child release, Fantastic Beasts and Where to Find Them arrives in movie theaters this November. The movie is set within the Harry Potter universe, but not explicitly about Harry Potter in general. In fact, those movies take place earlier than the first set of films and feature all new characters.