HP’s been going through something of a tough time these past few years, trying to decide on an identity, both for its brand as well as the products it sells. Fortunately, it seems to have settled on something as these products are some of the most cohesive, well-designed laptops we’ve seen from HP in a very long time.

First up, we’ve got the HP EliteBook Folio – yes, it’s part of the business notebook lineup, but it’s really just a very pretty piece of kit. Think of it like HP’s answer to the 12-inch Apple MacBook

Weighing just under 2.2 pounds, the Folio can be ordered with either a full HD or Ultra HD (that is, either 1920×1080 or 3840×2160 resolutions). It has a large trackpad just below the keyboard, offset by dazzling bezels, another obvious piece of HP’s design language. 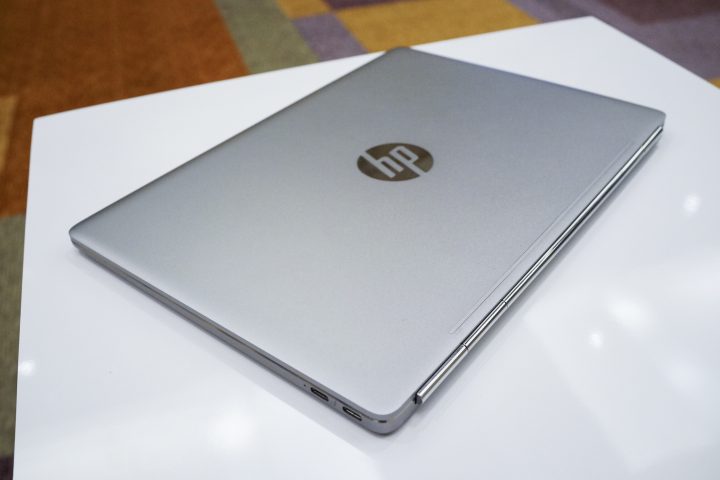 Looking at the side, you can see how thin the Folio is – right at 12.4 mm, or 0.488 inches. Despite this, HP managed to stick in two USB Type-C ports (take that, MacBook!) on the right-hand side, with the audio in/out jack on the left. Using both ports will let you run two separate 4k displays at the same time, since these ports double up as Thunderbolt 3 connections.

You’ll be able to snag one of the svelte EliteBook Folios in March, starting at $999.

Of all the updated HP laptops, the new Spectre is one to turn heads – in part because it’s so big. It’s a 15-inch laptop, which is not so crazy, but it’s a 15-inch laptop with a 180-degree hinge. It can rapidly go from laptop, to tent mode, to full on tablet – and a 15.6-inch tablet is going to be unwieldy.

An optional 4K UHD display partners up with an Intel Iris GPU to drive it. This version of the Spectre can be configured with up to 16GB of memory and quad, front-firing speakers tuned by Bang & Olufsen (whose brand HP is splashing all over their laptops). 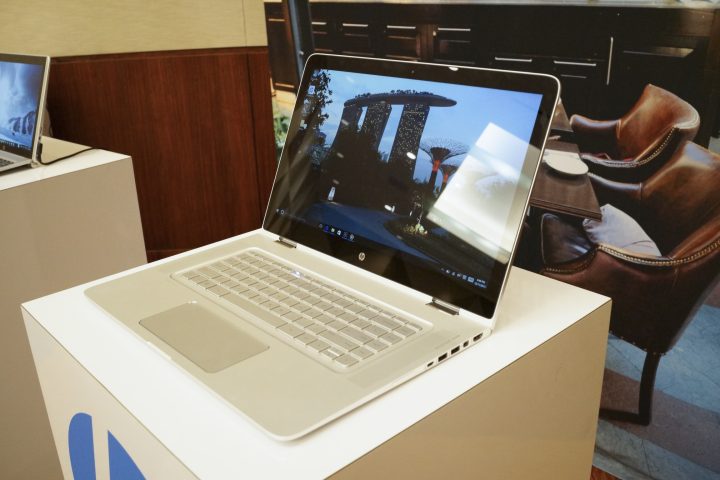 One of the ways HP gets around issues of build quality – an important consideration on this model, since flipping a 15.6-inch screen around all the time will put a lot of stress on a laptop – is to carve the whole thing out of a single block of aluminum. It’s one of the things that made modern Apple notebooks famous, and for good reason. 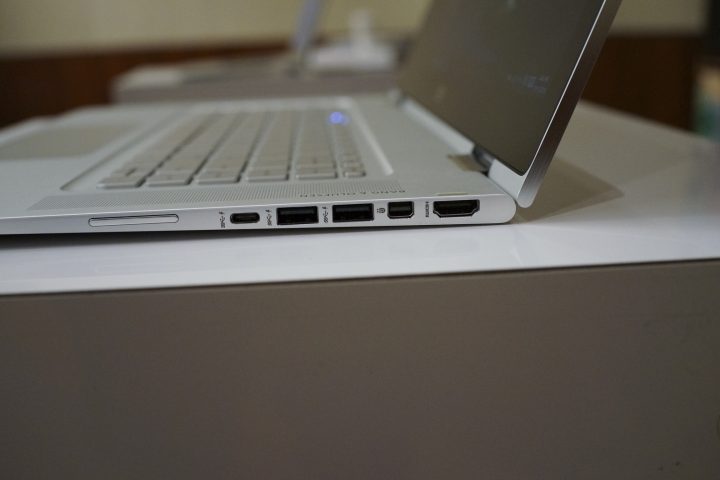 Battery life will vary depending on your configuration: if you get a 1080p Spectre, HP promises up to 13 hours of battery life, but take heed – if you get a 4K spectre, that drops down to 9.5 hours.

The 15.6-inch version of the Spectre x360 will be available from February 14th, only from HP.com and Best Buy. It carries a starting price of $1149.

Wait, didn’t we just talk about this? HP actually produces two lines of the Spectre now, and this smaller, 13.3-inch model is going OLED.

Available later this spring, HP says that the move to OLED will help shed 50 grams from the Spectre’s weight while simultaneously increasing the color gamut by almost half.

HP is keeping mum as to pricing and availability, but notes that in addition to snagging a fancy OLED panel, you’ll be able to order an Intel Iris GPU and a full 1TB of flash storage.

This new 12.1-inch, tablet/laptop hybrid features a 3:2 aspect ratio – which gives the device an oddball resolution of 1920×1280. An all-metal design gives the Pavilion x2 a weighty feeling, though 1.6 pounds for a 12.1-inch tablet isn’t bad. Adding on the full-sized keyboard doubles the weight of the unit.

Inside, you’ll be able to choose from either an Intel Atom CPU with a 64GB eMMC (slow flash) storage drive, or an Intel Core M CPU with either a 128GB or 256GB SSD. Ports include a USB Type-C as well as a full-sized USB 2.0 port for legacy devices. There’s also a micro HDMI port for connecting to an external display. 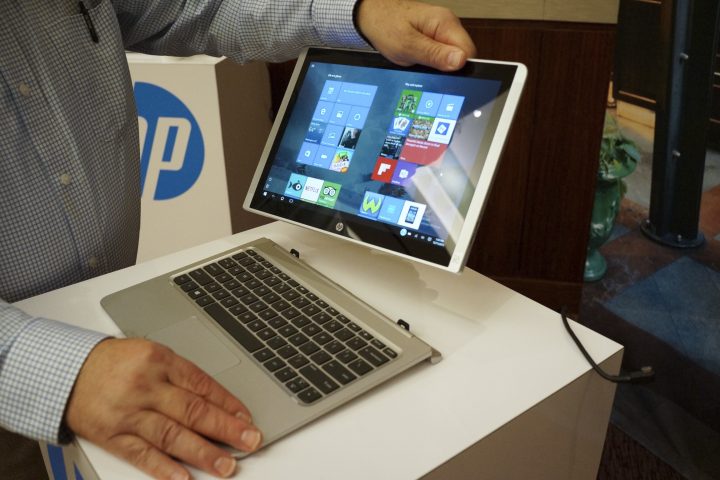 The Pavilion x2 launches early next month for just $500.

HP’s calling it the “world’s thinnest 14-inch laptop”, and it’s reasonably svelte, at 15.7mm thick – but we’ll just call it a good lookin’ business machine. Aside from being a slab of silvery metal, HP has completely re-engineered both the keyboard and the “ClickPad” trackpad for the new 2016 EliteBook 1040 models.

The laptops come specced for hardcore business users, with options for HP’s proprietary docking slots, HDMI, USB A and C, and even a possible smart card reader.

Once again going for “world’s thinnest and lightest”…mainstream business notebook, these HP laptops are the bread and butter of their EliteBook lineup. Comprised of three separate models, the EliteBook 820, EliteBook 840, and EliteBook 850, the specifications and capabilities differ depending on which model you choose.

The 15-inch EliteBook 850, for example, comes with optional 4K screens and a discrete GPU, while the 14-inch EliteBook 840 delivers 14 hours of battery life. Meanwhile, the 12.5-inch EliteBook 820 is tuned for portability and communications, with speakers designed to specifically make online calls clearer.

The Elite x2 is HP’s true Microsoft Surface competitor – it’s primarily a tablet with a clever magnetic keyboard dock. It relies on a combo USB-C / Thunderbolt port for both power and docking, and can be equipped with optional LTE. A built-in fingerprint reader works in conjunction with Windows Hello to let you unlock your computer biometrically.

Where the Elite x2 is designed to shine, however, is in serviceability. Where tablets like the Microsoft Surface / Surface Pro and Apple’s iPad are essentially designed to require specialty help when something goes awry, the Elite x2 might instead be fixed by your company’s in-house IT department thanks to its easy serviceability.

The HP Elite x2 ships in March for a starting price of $899.