Samsung announced the Galaxy S5 with a larger display, fingerprint reader, heartbeat sensor and a 16MP camera that can record 4k videos today. The new Galaxy S5 is water-resistant and dust resistant and but uses a plastic design like previous Galaxy S models, which could leave an opening for HTC.

The HTC M8 or All New HTC One will arrive at an event in late march where we expect to see the New HTC One with a metal design and a slightly larger screen. 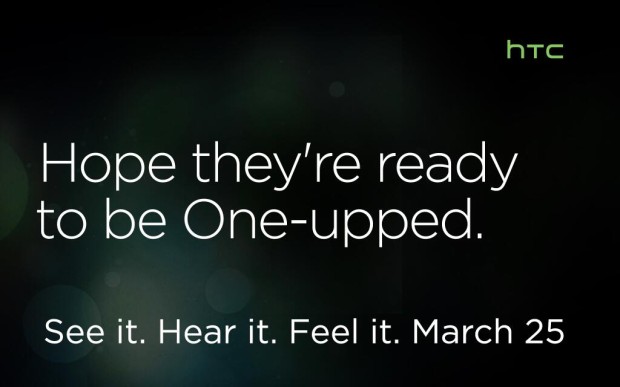 HTC boasts the All new HTC One will one up the Galaxy S5.

HTC and Samsung are major rivals in the Android smartphone space as both companies fight for consumer dollars and loyalty. The HTC Tweet is not surprising, but it will be interesting to see if HTC can deliver on this promise.

Samsung is pushing for a fast Galaxy S5 release date, that should land in the U.S. within two weeks of the HTC One event. Carriers are already talking about the Galaxy S5 as one retailer starts taking names.

HTC announced the HTC One ahead of the Galaxy S4 last year, but delays pushed the release dates into a head-to-head that we could see take place again this year.

Here’s a look at how the all New HTC One compared to the Galaxy S5 rumors. The devices should offer a similar array of features to attract consumers, but HTC offers a metal design that Samsung’s new plastic back won’t touch in the eyes of many users. It’s unknown if HTC will offer a water-resistant device like the Galaxy S5.

Consumers responded to the HTC tweet hoping for a waterproof smartphone and one with a bigger battery. One user claims the New HTC One could be the device that tempts him away from the iPhone.

@htc If this is what I think it is, this could be the one that makes me leave an iPhone.

The New HTC One passed an important hurdle in the U.S. clearing the FCC which means the New HTC One release could come very soon after the announcement in late March. The new HTC One is rumored to arrive in colors similar to the iPhone 5s.