A number of new devices were outed on Sprint’s inventory computer system. A leaked screen shot of the system shows that two new devices from Huawei and one laptop from Lenovo will be headed to the Now Network, though at this point it’s unclear if those devices will be 3G, 4G WiMax, or dual-mode 3G/4G devices. Details and information, including pricing, on those devices are not yet available.

The first device has a SKU number of EC5072 and is a Huawei device believed to be the Huawei mobile hotspot. If true, Huawei will be joining Novatel’s MiFi alongside the new Sierra Wireless Overdrive Pro on Sprint’s network. 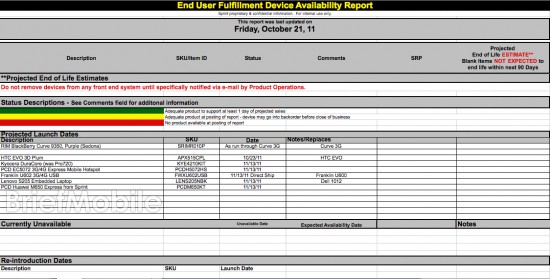 The second Huawei device has the model number Huawei M650 Express, and it is believed that the device will be a smartphone. At CTIA Fall 2011 a few weeks ago in San Diego, I got a chance to sit down to listen to Huawei’s executives talk about the company’s strategy, and Huawei isn’t shy about wanting to expand and grow so the addition of a Huawei smartphone on Sprint would definitely help the company reach that objective.

And lastly, the Lenovo IdeaPad S205 is also projected to be coming to Sprint’s network. That device will be a laptop with an integrated wireless radio for mobile broadband connectivity so you wouldn’t need to carry around another device, like a mobile hotspot router, to connect to Sprint’s mobile network.