Microsoft may have only recently added wireless display technology to its Xbox One console, but already apps like the new Hulu for iPhone app are taking advantage and allowing users to stream their favorite television shows and movies directly to Microsoft’s entertainment console

Hulu announced the new Hulu for iPhone app in a blog post this morning and it’s already turning heads. At the top of the new Hulu for iPhone is a button that turns the iPhone into a glorified media remote for controlling playback. The video itself is then sent to Hulu apps for consoles and small dongles like Chromecast. In addition to being compatible with the Xbox One, the new cast to TV button will work on Sony’s PS3 and PS4. Today’s press release didn’t indicate if the feature works with the Xbox 360, Microsoft’s last-generation gaming console. 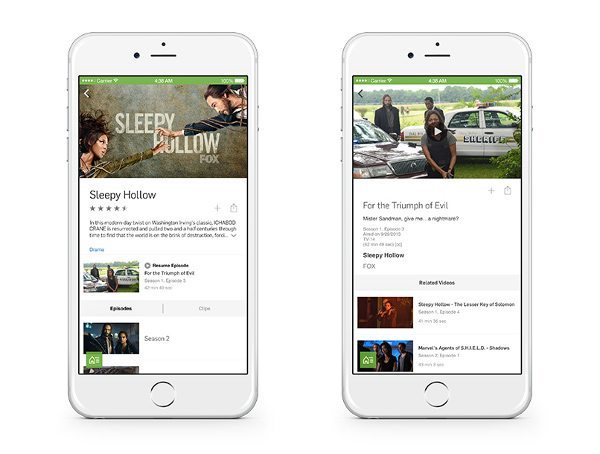 Read: Is Hulu Free or Not?

In addition to this new Cast to TV functionality, the new design itself is more along the lines of the updated design language that Apple introduced to many of its apps last year with iOS 6. There are translucent bars and shadows just about everywhere. Everything is stark white except for the new Action Tray — that’s the area that holds the Cast to TV button and search functionality.

Users of the new Hulu for iPhone app will find that every page for each show looks a bit cleaner and organizes functionality a little better. Bigger title cards and logos help users get a feel for the episode they’re about to watch and the actual network that it airs on. The screens that users encounter when they first open the app are reimagined too. A new menu tucked on the far left side sorts video content by what is popular, what Hulu thinks users might like and stuff that’s been recently added. On the far-right is a list of shows that you’ve actually watched and should be interested in.

The Hulu for iPhone video player itself has also been touched up. A navigation bar inside those apps allows users to activate captioning or Cast to their Xbox One without diving back into the app itself.

Hulu is promising that it’ll update this new app overtime to make it better for users, but today’s update pretty much completes a top-to-bottom refresh of Hulu on iPhone. Earlier this year, Hulu shocked video lovers when it announced that it would change how it treats free customers. It used to be that a Hulu Plus subscription was required to play video content through any of the service’s apps on tablets, smartphones and video game consoles. That’s still true for video game consoles, but in the summer Hulu began allowing iPhone and Android users to watch some content absolutely free – as long as they’re signed in. Users do still need a Hulu Plus subscription to enjoy some high-profile content. For example, Hulu Plus is the only way to get entire seasons of Family Guy.

A Hulu Plus subscription costs $7.99 a month, $2 less than Netflix does.

iPhone users can now head into the iTunes App Store on their device to manually start the Hulu for iPhone update. Users can also simply wait until their iPhone updates the Hulu for iPhone app on its own. That happens whenever an iPhone is charging and has a reliable internet connection. Users with an iPhone 6 or iPhone 6 Plus are better off updating as soon as they can if they’re big users of the service. This latest update doesn’t just include a redesign. It also adds support for the bigger screens that are included in the iPhone 6 and iPhone 6 Plus. In order to get the update, iPhones and iPads will need to have iOS 6 installed already.

This update also adds support for in-app purchases. What that means is a Hulu Plus subscription can now be purchased through the app, without having to dive into a web browser on a PC or Mac.