The latest Humble Bundle, the Humble Indie Bundle 8, lets gamers pay what they want for up to seven popular indie games for the PC, Mac and Linux including Thomas Was Alone, Little Inferno and Hotline Miami.

Like previous Humble Bundles, gamers can pay as little as $1 for five great games, or they can choose to beat the average price to get a total of seven games. All games are cross-platform will work on PC, Mac and Linux, and users can activate them on Steam, making it easy to play them on multiple devices. There’s also an option to download all of the games with no DRM for gamers who prefer no restrictions on their games.

All gamers who buy the bundle will get Little Inferno, Awesomenauts, Capsized, Thomas Was Alone and Dear Esther regardless of how much or how little they give. Many of the games make their Linux debut on with the bundle.

Gamers who beat the average price will get the popular Hotline Miami and Proteus.

It’s hard to find just a few standout games in this new Humble Indie Bundle, as they are all fantastic games, let alone independent games. The bundle contains some of the biggest indie games of the past year or so. 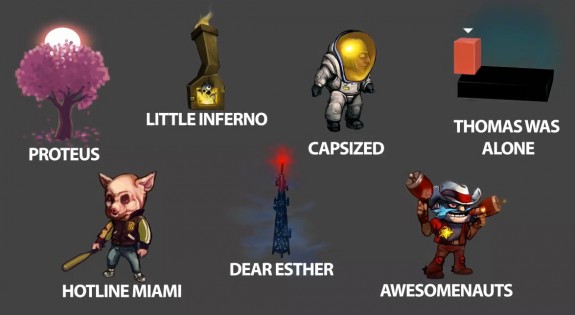 Games have two weeks to buy the Humble Indie Bundle 8, though the decision to buy it shouldn’t take nearly that long.

Humble Bundle also has a weekly bundle that currently features Alan Wake and Alan Wake’s American Nightmare for the PC. There’s no average to beat on that deal, but it’s only around for two more days as of this writing.