The new line of Intel graphics chips come with the company’s Haswell CPUs that will make future Ultrabooks thinner and more efficient and will likely come to the next refresh of MacBooks. At the low-end of the new lineup Intel will use its current Intel HD graphics brand, while the high-end comes with a new brand called Iris.

A story about the new chips from AndandTech say that Intel’s Iris chips are finally worth mention in the same sentence as graphics chip powerhouse NVIDIA. Intel’s benchmarks using 3DMark11 show the new Intel Iris graphics 5100 and Intel Iris Pro graphics 5200 are more than twice the current Intel HD graphics 4000. 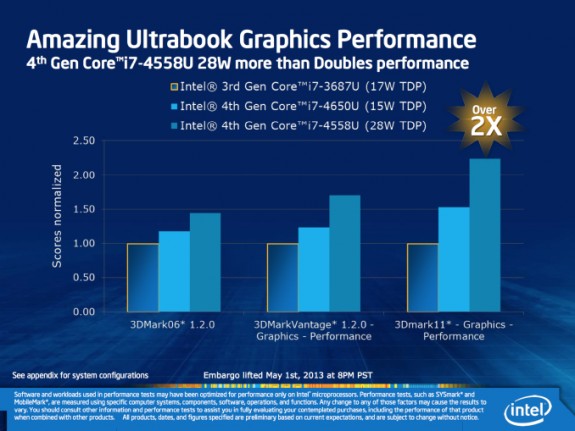 With those benchmarks Intel Iris graphics chips are likely capable of playing modern PC games, though not at the highest graphics settings. The chips should perform as well as the current NVIDIA GeForce 650M found in the 15-inch MacBook Pro with Retina Display.

It’s easy to imagine Apple using Iris Pro graphics and the new NVIDIA GeForce 750M in the next refresh of the 15-inch MacBook Pro with Retina Display. While the Iris GPUs may get the same performance as NVIDIA’s last-generation discrete GPUs, they will use less power which means longer battery life for users. That means the low power mode of the laptop can have similar performance to the current model when it’s discrete GPU is in use.

Paired with low-powered next-generation Core i processors, the GPUs could lead to a possible MacBook Air with Retina Display. At this point the only thing that may hold that back is the availability and power consumption of the necessary displays.