We are just a couple of days away from March 16 which of course is launch day for the upcoming third-generation iPad from Apple. The device will be going on sale at Apple Stores around the world but also at third party retailers like Best Buy, a retailer that has apparently started to receive inventory of the new slate. A photo has emerged claiming to show off what is apparently stock of the Apple’s new iPad.

Unfortunately, the boxes are covered up by manifests but in the top right you can clearly see that the box is labled ‘iPad,’ which is of course, the name that Apple has given to its new tablet.

The tablet is set to go on sale at 8AM at Apple Stores and at AT&T and Verizon retail locations.Verizon has confirmed to us that it will open its doors early, at 8AM, to coincide with Apple Stores. 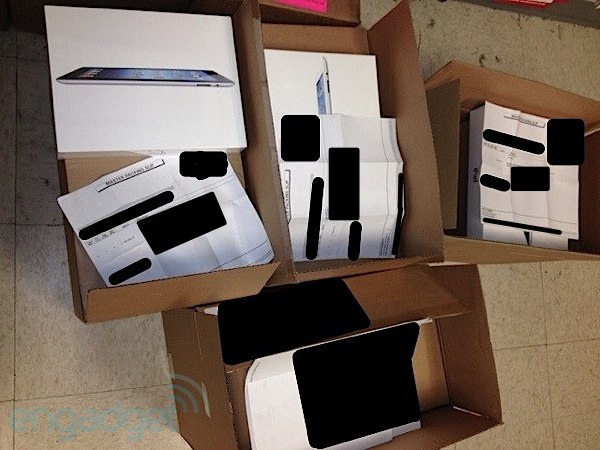 We haven’t confirmed the same for Best Buy or AT&T.

Apple’s new iPad should also be available online, at the very least, at these retailers as well:

The new iPad brings several upgrades over the previous version of the iPad, the iPad 2, including 4G LTE connectivity, a high-resolution Retina Display, an improved camera , and a more powerful processor.

And because of these upgrades, the device quickly sold out of pre-orders.

Right now, the device has wait times of up to 2-3 weeks and those looking to get it on launch day will have to go down to a local physical location like a Best Buy or an Apple Store for a chance to get one.