Today is March 16th and that means that it’s launch day for Apple’s new iPad. It also means that the device is in the hands on some people that are going to want to jailbreak it. Well, guess what? iOS hacker MuscleNerd has tweeted out a photo that shows a jailbreak on the new iPad which means that a jailbreak process for the general public is likely underway.

Now, this doesn’t mean that the jailbreak will arrive tomorrow.

In fact, the iPhone 4S was jailbroken on the first day that it arrived but it took months before it was released for consumption by the general populous. So those of you that want to jailbreak your new iPad should start tempering your expectations now rather than later. 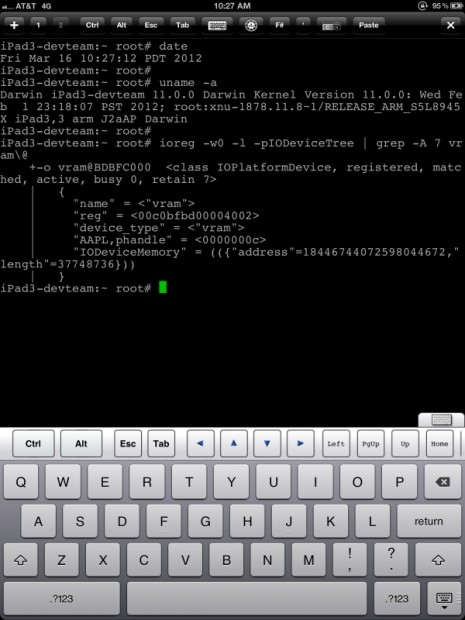 Even MuscleNerd says there is no ETA on the update and that this is just the first step in what will be a series of steps required to get this out to the public.

As for those of you with an original iPad, there is a jailbreak currently available to you if you’re running iOS 5.1, the latest operating system that Apple has released for its iDevices.

Those with the iPad 2 aren’t so lucky as a jailbreak is still not available for it or the iPhone 4S, both of which are running an A5 chip from Apple. It appears that the A5 is a much harder processor to jailbreak.

It’s unclear if the A5X processor found in the new iPad will make the jailbreak process even more difficult.

That being said, we’re excited about that things are in motion for both the iOS 5.1 jailbreak for the iPhone 4S and iPad 2 as well as for the new iPad.