The new iPad went on sale today, and for the first time, you can buy a 4G LTE iPad.

Verizon and AT&T both have 4G LTE iPad models available today, with the only difference being which 4G LTE network you can connect to.

This means that many of you want to know which network is faster, AT&T 4G LTE or Verizon 4G LTE?

We picked up two new iPads, one on AT&T and one on Verizon so you can see a number of New iPad 4G LTE speed tests.

In the video below Xavier Lanier performs several speed tests to help you decide which one to buy. In addition to the standard SpeedTest.net app, Xavier downloads music from iTunes to provide a look at which is faster.

As you can see in the speed test video, both AT&T 4G LTE and Verizon 4G LTE networks are fast. Here are the first new iPad 4G LTE speed test results. 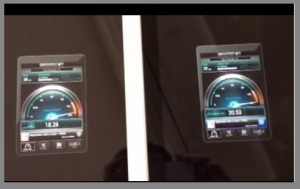 Additionally, the real world speed test, where Xavier downloads the album from Slumdog Millionaire from iTunes. In this real world test, both AT&T and Verizon delivered blazing fast speeds. In fact, there wasn’t much difference in the time to download a full album to each iPad.

If you’re considering a new iPad with 4G LTE, the biggest reason will be which carrier has the best coverage in your area. Verizon has a more mature 4G LTE network that covers 200 million people, while AT&T covers only 74 million. Check our the post above for a detailed comparison. The best pick will vary depending on your location and where you frequently travel.