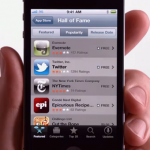 Apple is running a new TV commercial that calls out the competition and stresses the simplicity of the App Store. Instead of presenting specs or geeking out, Apple once again keeps it simple and gives viewers a taste of how the iPhone can make everyday tasks a little easier in the real world.

The new iPhone 4 commercial demonstrates how practical apps can be downloaded from the app store that can make the iPhone more than just a phone. That isn’t news to most iPhone users of course, but commercials like this do a good job of attracting first-time smartphone users.

Of course there are apps available on other smartphone platforms, but mass marketing for those devices seems to focus on firsts, specs and speed rather than user experiences. Apple commercials like these aren’t going to get any Android fanboys to switch to iOS, but they’ll get a lot of feature phone suers to put an iPhone at the top of their iPhone wish lists.