Apple has released a pair of new television ads, one for its iPhone 5c and a second for the flagship iPhone 5s smartphones that were announced this month.

The iPhone 5c is a device that replaces the unibody aluminum construction of the flagship iPhone 5s in favor of a colorful plastic shell. In its keynote announcing the iPhone 5c, Apple executives noted that the device has a larger battery than the iPhone 5 that it effectively replaces in the late 2013 iPhone lineup and the device also has a steel frame underneath the smooth, unibody polycarbonate construction to give the iPhone more structural strength; the metal reinforcement also serves a dual purpose as the antenna. 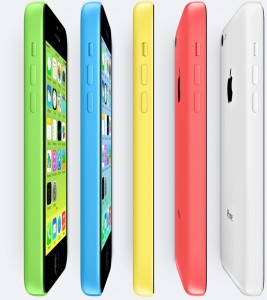 The Apple ad has been posted to YouTube for your viewing pleasure. In it, Apple shows splashes of colored paint that forms the casing of the iPhone 5c in bright, colorful hues. At this point, it’s unclear what process Apple is using for the paint–whether the colors are mixed into the plastic or painted on.

Rival Nokia, which has been using colors on both its metal Symbian phones and more recently on its polycarbonate unibody Windows Phone smartphones under the Lumia line, has stated that its color process differs from what many in the industry applies. Rather than painted on color, Nokia mixes the color in the materials–whether that’s plastic or metal–so that the color is mixed more evenly. In this case, it will also hide scratches as when you scratch the top layer, rather than just scratching paint to reveal a white underside, you’re revealing more of the same color.

The iPhone 5s is available in three colors: silver, gold, and a space gray. The device retains the same unibody aluminum construction of the outgoing iPhone 5.

The iPhone 5s ad has not been posted to Apple’s official YouTube channel at the time of this writing. It was hosted on a third-party channel and was reported by Phone Arena.