Apple is planning to release two iPhone 6 models with specific screen sizes and continue selling a cheaper iPhone 5s after the iPhone 6 release date in September claims a new report from China. The larger iPhone 6 screens will reportedly feature a Sapphire display cover for increased strength. 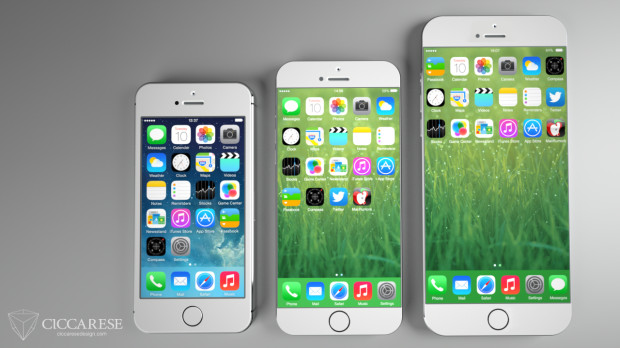 According to a report, industry insiders that saw iPhone 6 prototypes claim we will see larger screens in September. Concept by Ciccarese Design

This iPhone 6 report comes right as rival Samsung prepares for the Galaxy S5 launch which could reveal a larger 5.25-inch display and possibly a higher 2560 x 1440 resolution that would offer 559 pixels per inch (ppi).

According to the iPhone 6 rumor, industry insiders tell the South China Morning Post that Apple is planning two iPhone 6 models with larger screens. The iPhone 6 release date will come with a 4.7-inch iPhone 6 and a 5.5-inch iPhone with higher resolutions. The insiders claim the iPhone 6 display will offer 441ppi, which is the same as the Galaxy S4, but they don’t offer a specific resolution for each screen. This report comes on the heels of another that suggests Apple is working on a bezel-less design for the iPhone 6.

‘There are no shortage of iPhone 6 rumors that focus on the larger screen, but there are still a variety of sizes and resolutions reported. If the South China Morning Post’s sources are correct, we should see rumors converge on specific sizes later this spring. The insiders claim Apple will freeze iPhone 6 design changes in April.

The insiders explain why they believe Apple is shifting to a larger screen telling the publication, “They have to tackle the phablet [devices that serve as both phone and tablet] market. People want bigger screens now.” Another insider states that Apple is not planning a curved iPhone 6 display, explaining, “Apple doesn’t do anything until Samsung does it, and then they improve upon it.”

This report also claims that Apple will make use of the Sapphire facility that the company is working hard to ramp up in Arizona. The insiders say that Apple is planning to cover the entire screen of the iPhone 6 with Sapphire. Sapphire is a strong material that can withstand abuse without showing scratches and should help prevent broken displays from drops. Sapphire is already on the iPhone 5s lens cover and home button.

Read: iPhone 6 Rumors – Everything We Know So Far

This report mentions Apple will drop the iPhone 5c, which is in line with The Wall Street Journal’s report, but it is not clear what this report means when it states the iPhone 5s will be made from cheaper materials. It may mean cheaper than Sapphire, which may push the price of an iPhone higher or it could be pointing to a plastic iPhone with iPhone 5s internals.

Additional iPhone 6 rumors suggest Apple is preparing an Apple A8 processor for the new device. Rumors also point to an improved iPhone 6 camera with a better 8MP sensor or a 10MP sensor and a new front-facing sensor from Sony.