It appears that Apple has started to make the preparations to start shipping out the fifth-generation iPod touch to those who have pre-ordered the device.

Back at the iPhone 5 launch event in September, Apple also unveiled new iPods including the fifth-generation iPod touch which features an all-new design, a 4-inch Retina Display – same size as the iPhone 5’s larger screen, Siri, a new and improved camera and of course, Apple’s new operating system, iOS 6.

Since the middle part of September, the device has been up for pre-order though thus far, Apple has remained mum on the specifics of its release date. The company only said that the device would be shipping in October. In fact, the U.S. Apple Store still says that the device is shipping in “October” with no specifics. 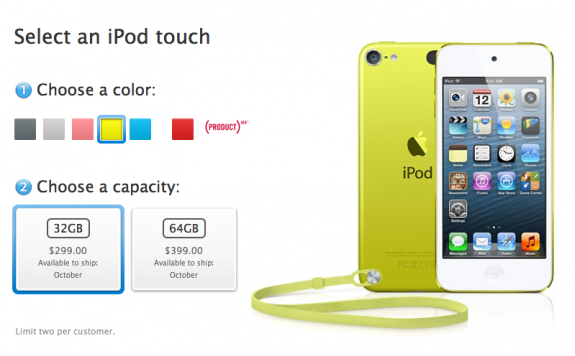 It would appear that the launch of the new iPod touch is imminent.

However, it now looks like Apple has begin preparing to get iPod touch orders out to customers as, according to MacRumors, some users are saying that their pre-orders have moved into the “Preparing for Shipment stage” which is the stage before they are given to delivery companies for delivery purposes.

Yesterday, new pre-orderers in Australia saw their shipping times move from October to three weeks and it appears that some of those who pre-ordered in are now seeing an October 29th expected delivery date.

Apple’s iPhone 5, which was also announced at the event, was released on September 21st.