With the holiday shopping season and break behind it, Microsoft’s 343 Industries has once again turned its attention to updating last fall’s Halo 5: Guardians with new features, maps and upgrades. Last week the studio shared some information about its next major update to the science fiction first person shooter that’s exclusive to the Xbox One. The January Halo 5 update is called Infinity’s Armory, and players can expect lots of new additions to the game free of charge.

343 Industries revealed Infinity’s Armory in a post last week on the Halo Waypoint Community Blog. Halo 5: Guardians launched last year to generally positive reviews. Microsoft hasn’t said how many copies of the game were sold, but enough people were interested in Halo 5 that the Xbox One was the best-selling console the month the game debuted. Before release, 343 Industries confirmed that users would get monthly updates with new multiplayer maps, bug fixes and feature improvements without having to pay anything. With past Halo games, getting new maps did come with an additional purchase on top of the game’s price.

343 Industries reveals that Infinity’s Armory is scheduled to launch sometime at the end of January in the post. A picture within the post also reveals an all-new map with what looks like wildlife containers stacked on one side of the level and a large open space that’s perfect for snipping on the other.

Other new maps are on tap for the update, but 343 Industries isn’t showing them off yet. It’s also not detailing the other new weapons, armors and weapon skins that it’s promising to deliver. As has become tradition, the studio will hold a livestream of what’s in the Halo 5 update before it’s made available to everyone. 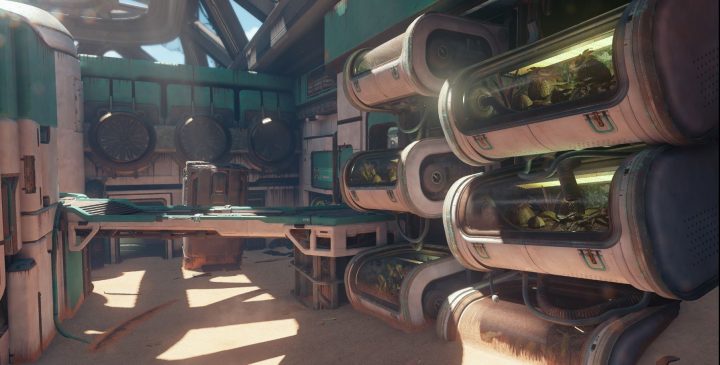 Any new weapons and character additions that 343 Industries adds to the game will almost certainly come from obtaining REQ Cards. REQ Cards are purchasable trading cards that come in packs directly through the game itself and the Xbox Store. Players earn new REQ Cards as they play Warzone or they can purchase packs outright with real money. REQ Cards are how 343 Industries is able to provide Halo 5 updates free of charge.

Behind the scenes updates are providing those play Team Arena with more REQ Points now than they were when the game first debuted, 343 Industries says. “Team Arena has been awarding slightly below the average amount of REQ points per minute, so we’ve made an update to bring this more in line with the intended design. In short, more REQ Points,” the team at Microsoft notes. To be clear, this change seems to have been effective immediately.

Playlists that use some of the maps that the community created use the Forge tool that the studio added in the December Halo 5 Update are on their way too. Griffball, is confirmed to be on its way to Halo 5: Guardians sometime in the future, though 343 Industries isn’t ready to say when that’ll be exactly. Fiesta, another community made game mode, is coming too. Griffball gives two teams Gravity Hammers and tasked them with planning a bomb on the other team’s goal. Forge makers can create up to 100 different map and 100 different game variants now. The limit was 40 different map variants previously.

Halo 5: Guardians takes place after the events of Halo 4. Xbox One owners play as both Master Chief John 117 and Spartan Jameson Locke. Locke and his team are tasked with finding John 117 and Blue Team and bringing them back for questing in. Blue Team and John 117 are on a quest to explain some unexpected objects destroying colonies in deep space.

Halo 5: Guardians is $59.99 directly from the Xbox Store and retailer GameStop.