A new leak originating from Swiss site PocketPC.ch claims that the forthcoming build of Windows Phone 7 Tango, which will be Windows Phone 7.6 following Windows Phone Mango’s 7.5 moniker, will come with video chat integration from both Skype and Google Plus. A tipster to that site claims that they have seen the latest build of Microsoft’s mobile operating system for smartphones. 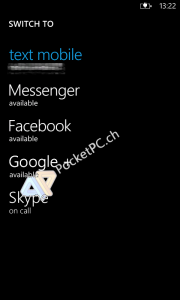 Users of both Skype and Google Plus services on Windows Phone 7.6 Tango will have the ability to make and receive video calls, chat, and perform voice calls. However, the software is still not fully baked at this time, and only chat is working on Skype for Windows Phone. Google Plus integration is even less developed on the platform right now, but users of Google’s service will be able to chat, do video calls, and partake in Google Hangouts.

It’s unclear when the operating system is set to arrive, but already PocketPC.ch’s claims are being debunked by various readers and websites stating that the screenshots are doctored.

Windows Phone Tango was said initially to not necessarily be a direct successor to Mango, but to be the first version of the platform designed to target the entry-level smartphone users.