A new version of the Google Play Store had leaked, and Droid-life had installed the new storefront, which takes us to a major version 4.0 upgrade, that shows a more refined UI and may hint at the future direction of Android. Potentially, given the timing of the leaked Play Store, Google may have future changes planned for the Android OS when the company kicks off its developer conference in mid-May with the start of Google I/O. 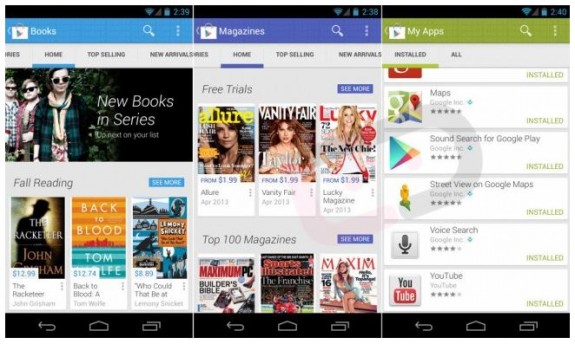 Perhaps in a move that shows a focus for more LCD, rather than AMOLED-based displays, the most noticeable change to the Play Store right now is the background. Currently, Google uses a darker themed background–either black or dark grey–for much of the Play Store. The company is shifting to a light grey background in the new Google Play 4.0.

A black background is more beneficial to AMOLED-based displays, particularly those used by Samsung like the HD Super AMOLED panels on the Galaxy S3 and Note 2 currently. On AMOLED, when there is white or color on the screen, then the appropriate pixels get activated. The blacks don’t require power. Hence, on AMOLED, you get deep, dark, rich blacks and high contrast leading to what some may argue as hyper-saturation of colors. On LCD panels, you have a backlight so the entire screen consumes power regardless of what is being displayed.

Additionally, you’ll see that Google uses more italics and its font selection is cleaner. This gives the new Play Store a more modern UI along with larger icons and pictures. The new Play Store’s design focuses on the content of the store and is uncluttered.

Information and content is displayed in little cards, akin to Google’s UI for the Google Now search app. The cards UI is also present on the newly launched Google Keep service as well.

And what seems nice is that apps will automatically update now. With the new 4.0 UI, users will have to opt out of automatic app updates, rather than opt-in as is currently the case right now. This helps to ensure that users will always have the most up to date version of the apps that they have installed.

Moreover, it seems that there is fewer clicks. With the new Play Store, when you purchase or download an app, you can continue to browse right away for more content; now, after a purchase is made, Google takes you to another screen to tell you your ‘App will be downloaded and installed.’

The changes implemented aren’t dramatic. They’re more subtle UI changes that help to refine the user experience for Android users. These changes though may hint at broader changes that Google may have planned for the next version of Android and shows the careful evolution of the Play Store and the Android operating system.

It’s unclear when the new Play Store will begin rolling out for customers. At this time, it seems like the Play Store 4.0 version is still a work in progress.