Instead of a circular flash model on the iPhone 5, the dual-LED flash will be stacked on top of each other and the unit will be housed in an oval cutout that some sites on the Internet are classifying as a “lozenge” shape.

It’s still unclear at this time if Apple intends on maintaining the same 8-megapixel camera sensor coupled with the sapphire glass optics that debuted with the iPhone 5, or push the iPhone 5S up to a 13-megapixel camera sensor to stay competitive with Sony’s Xperia Z or Samsung’s Galaxy S4 flagships. While megapixel count is becoming less meaningful in the tech space, the dual-LED flash may help photographers capture better images at night.

The images of the dual-LED flash unit on the iPhone 5 is now presented on China’s Weibo
service by @PalmUncle and was re-posted on SlashGear. 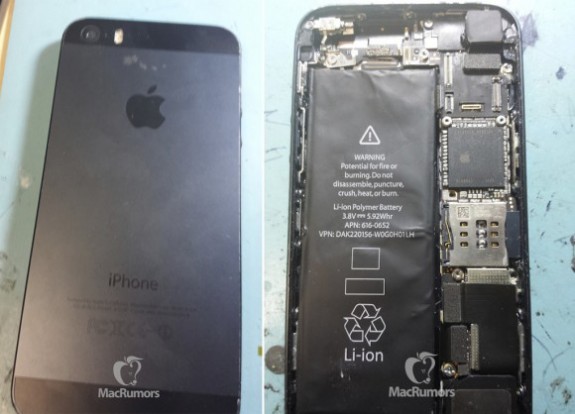 In the case of the iPhone 5, the single LED flash may not be bright enough to capture images when a subject is placed too far away from the reach of the light that’s emitted by that flash unit. However, if the subject is too close to the LED flash, the problem is that the flash can be over-powerful and create ghosting on the image. To counter that, a variable strength dual-LED flash could benefit consumers in being able to capture brightly lit images when the subject is further away from the camera. Nokia did a fantastic job with the dual-LED flash on the AT&T Lumia 920 smartphone, though the low light capability of that Windows Phone model often negates the need for the external flash unit to be used.

The competition in the camera space on smartphones is heating up, and there is more attention paid to more capable cameras. Nokia and HTC are differentiating their offerings with low light camera capture capability, Samsung and Sony are pushing for mainstream megapixel count, and Nokia is exploring large sensor and multi-lens technologies. Any improvement to the camera system on the iPhone would be welcomed. Samsung is also focusing on a more camera-centric phone with the announcement of the Galaxy S4 Zoom.

The iPhone 5S is rumored to be coming in three colors this fall as well. Previously, it was believed that a fingerprint sensor would appear on the iPhone 5S where the “S” in the device’s name would stand for “security.”