A new Mac Mini release could arrive in February or soon after if a new retailer listing is to be believed. This Mac Mini update would finally offer the small desktop computer with a Haswell processor, something the rest of the Apple computer lineup is already sporting.

The new Mac Mini 2014 retailer listing is especially exciting for consumers that want a cheap Mac and already have a monitor to attach it to. The current Mac Mini is $599 with refurbished models as low as $469 when in stock. A MacBook Air by comparison starts at $999.

Apple last updated the Mac Mini in October 2012 with a new processor and RAM options as well as an Apple Fusion Drive option. This corresponded with an Apple special event, but right now there are no rumors of a February Apple event.

It is worth noting that retailers are not always accurate about the timing of new products, so a new Mac Mini 2014 release is far from confirmed. 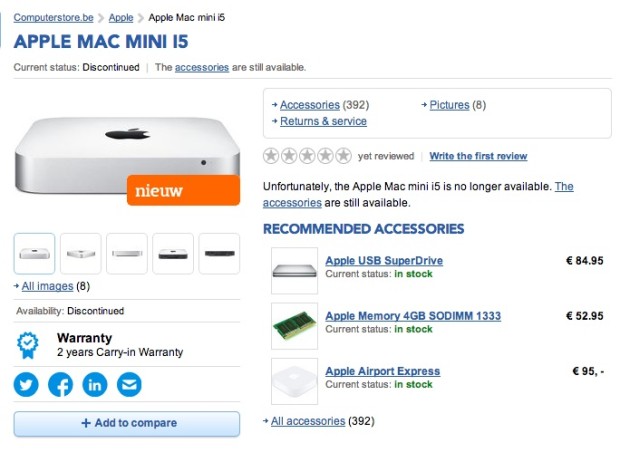 The new Mac mini 2014 model is reportedly coming in February.

According to Mac Rumors and a forum member grandM, the retailer claims the information it is using for the new Mac Mini 2014 place holders, “comes from apple or reliable sources.” The forum member relays that the retailer, “wouldn’t put up this page a year in advance and suspect the mini will be released before end of February 2014.”

The new Mac Mini 2014 model placeholders at listed with an Intel Haswell Core i5 processor option and an Intel Haswell Core i7 processor and both include Iris Graphics like the MacBook Pro Retina. The exact processor specs and RAM information is missing from the listing, but description claims the new Mac Mini will feature faster 802.11ac wireless and come with four USB 3.0 ports as well as HDMI and a ThunderBolt port. It’s not clear if this could be a ThunderBolt 2 port like that found in the MacBook Pro Retina and Mac Pro, to help support 4k displays.

The last four new Mac Mini updates arrived in summer and fall, but Apple did announce a new Mac Mini in March in 2009. Last year Apple shifted almost all of their product launches to the fall, but did not update the Mac Mini. When the Mac Mini 2014 model arrives Apple could use a special event or simply add it to the Apple Store and issue a press release similar to how the company announced a new MacBook Pro Retina processor update in February 2013.

It’s not clear if the Mac Mini 2014 model price will drop, though Apple mad a push to introduce lower cost versions of the MacBook Pro Retina in late 2013.