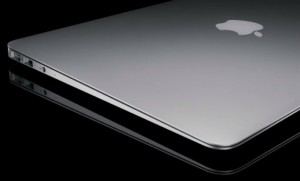 The “one more thing” at today’s Apple event was a new Macbook Air. Steve teased us by mentioning some of the features they’re taking from the iPad for this new MBA, but ultimately, it’s just a smaller, newer model. Oh, and it has a younger brother. 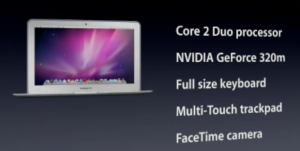 The open case view of these notebooks show four big batteries and a tiny motherboard holding what it essentially the whole computer. Matches leaked photos that showed up earlier. Battery life is 5 hours on the small one, 7 hours on the big one, both measured by wireless web activity. Standby time is 30 days. 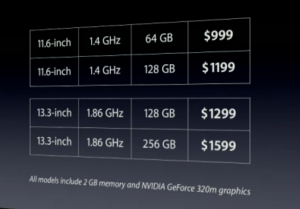 Steve made a note of saying these are instant-on devices, like the iPad, due to the SSD. True enough, SSD do allow resume from sleep in a second, but don’t get that confused with “always-on” which allows your smart devices to do things like sound alarms and receive calls while they seemingly sleep. Still, these are easily the most portable Macs ever made.