The new MacBook Air release date arrives today with a $100 price cut across the board, and new processors and longer battery life.

Last week we shared the rumor that Apple was planning a new MacBook Air release date this week and that stock of the older MacBook Air was dwindling at third-party retailers like Amazon and Best Buy. In a silent update overnight Apple pushed the new MacBook Air 2014 models to the Apple Store and announced the price cut.

Early rumors suggested Apple planned to announce the new MacBook Air release dates at WWDC 2014 in June, but it appears that event will be focused on iOS 8 and OS X 10.10 instead of a mix of hardware and software.

The new MacBook 2014 devices are available in some Apple Stores today, and ship within 24 hours from the online Apple Store.

Shoppers looking for MacBook Air 2014 deals will need to wait for other stores like Amazon to update with the new MacBook Air price and stock of the new models, but this will likely take place within days. 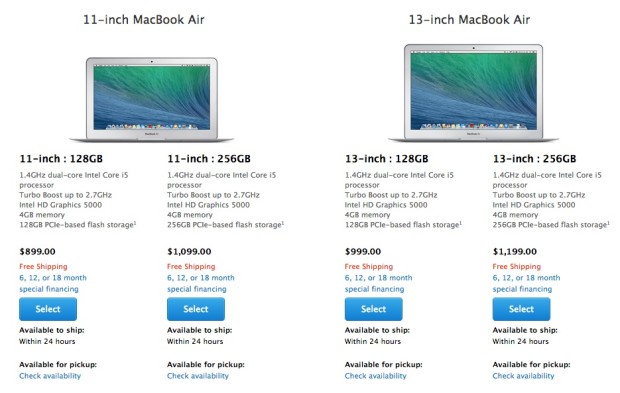 The new MacBook Air 2014 release date is today, and it includes a faster processor, more battery life and a $100 price cut.

With this update users get a faster computer that makes use of the latest Intel 4th generation Haswell processors. The older models shipped with a 1.3Ghz processor at the lowest level, but the 2014 MacBook Air notebooks start with a 1.4Ghz processor.

Despite a price cut for the new MacBook Air, Apple did not drop the amount of storage or RAM. Both of the MacBook Air 2014 entry-level models offer Intel HD 5000 graphics, 4GB RAM and 128GB of PCIe flash storage. A $100 price jump doubles the storage to 256GB and includes options to customize the notebook with a 512GB SSD for $300 and 8GB of RAM for $100. Apple also offers a 1.7GHz Intel Core i7 4th generation processor option for another $150 upgrade fee. A fully loaded 13-inch MacBook Air 2014 model retails for $1,749.

The new MacBook Air includes a boost in battery life, adding one hour of additional iTunes movie playback to each model. This means 9 hours of watching iTunes movies on the 11-inch MacBook Air and 12 hours on the 13-inch Macbook Air. Overall the notebooks still offer the same 9-hour and 12-hour best estimates as last year’s models. 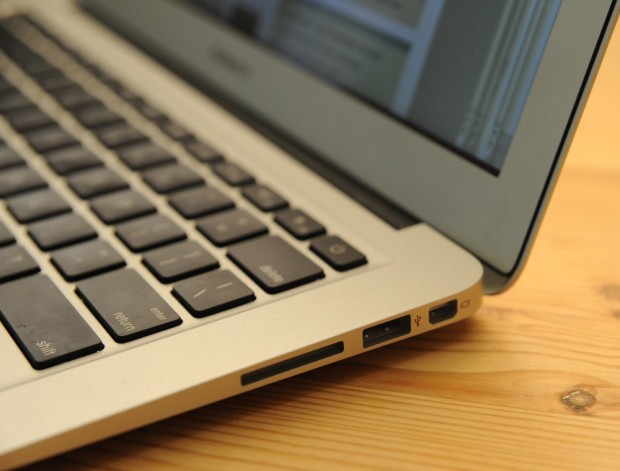 The 11-inch model includes a 11-.6-inch display with a 1366 x 768 resolution, two USB 3.0 ports and a Thunderbolt port. The 13-inch MacBook Air offers the same ports, and adds a SD card slot. Both notebooks include a FaceTime HD video camera.

Users also get 802.11ac WiFi support, which is not new for this model. This new faster WiFi offers better range and speeds when connected to a compatible router.

The new MacBook Air 2014 models ship with OS X Mavericks and include free access to iPhoto, iMovie, GarageBand, Pages, Numbers and KeyNote. Apple will likely announce a new version of OS X, called OS X 10.10, at WWDC 2014 in early June. This will likely arrive as a free update or MacBook Air owners later this year.

Apple did not update the 4k compatible Mac list with the new MacBook Air 2014 update. Users that need support for a 4K monitor should look at a MacBook Pro Retina or wait for a rumored MacBook Air Retina.

Rumors still point to a brand new MacBook Air Retina in 2014. This device will reportedly arrive with a new look and a higher resolution display. It is possible that it will include Thunderbolt 2 and faster RAM that is rumored for Apple products. This MacBook Air Retina update could potentially arrive during the holiday shopping season with a 12-inch display.

Shoppers looking to save even more should check out the refurbished MacBook Air price drop that took place overnight. The MacBook Air 2013 model dropped below $800 for a refurbished model that includes a full year of warranty from Apple.

These cheaper MacBook Air 2013 models are still a great deal for shoppers that need to save more on a MacBook Air. While there are upgrades for the 2014 lineup, Apple did not include new Thunderbolt 2 ports and this update did not gain the faster RAM we expected. As there is no design change, smart shoppers can pull grab significant savings with a 2013 MacBook Air model.