Starting today, MightyText will add the ability to sync media between devices using its native Android application and plugins for both Chrome and Firefox, making it a sort of Android equivalent to Apple’s iCloud syncing solution, Microsoft’s SkyDrive, and storage service Dropbox.

With MightyText for Android installed a user’s photos, videos, favorites, and texts are synced between their phone and their laptop when they open the application. Additionally once MightyText is activated on an Android phone, it will sync those pictures and video in real-time, much in the same way it does messages and contacts right now. 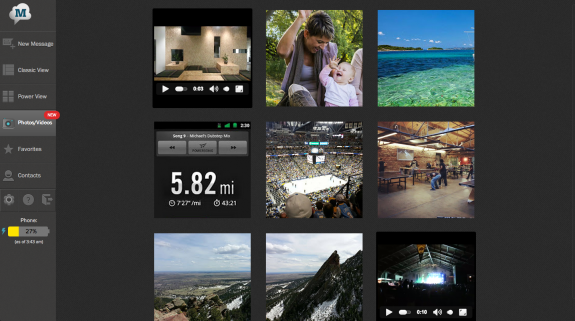 MightyText for Android Phones is free and so are the Firefox and Chrome plugins the service uses to communicate with Windows PCs. There’s also a web app for use on devices the service doesn’t already natively support. The company is planning to release native applications for the Kindle Fire and iPad sometime in the future. There is a separate application for those who wish to use the service on Android tablets, though picture and video sync haven’t yet made their way to it.

Read: Mighty Text Hopes to Be iMessage for Android

In a profile with TechCrunch MightyText’s Maneesh Arora openly called out Apple’s syncing solution saying “You don’t hear too many people raving about the iCloud user experience.”

Introduced in iOS 5, iCloud allows users of only Apple products to sync files effortlessly between devices including music, photos, contacts, favorites.  Since then, Apple has also built the service into its Mac OS operating system, ensuring that users who stay in its ecosystem may never have to worry about backing up locally or plugging in their iOS based devices for long syncing sessions.

Read: What is iCloud and What Will it Do for Me?

Since Dropbox’s launch in 2008, other companies have also created solutions designed to help users keep sync their data between devices. Though originally launched as just an online storage solution Google Drive now allows users to sync effortless between Windows, and Android-based devices. So too does Microsoft’s SkyDrive solution, though it now offers applications for Windows, Windows Phone, Android, and iOS. SkyDrive will only sync in real time with Windows Phone. With all of these services, users can purchase even more storage when they need it for a low annual price.

Dropbox also offers these abilities plus the free storage to those who recruit friends to the service and add their Facebook account.