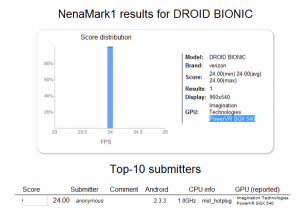 A new set of benchmark has leaked online for the Motorola Droid Bionic, a handset that Motorola CEO Sanjay Jha had stated that they are not just delaying, but taking back to the drawing board to re-design for a summer launch alongside the 4G LTE modem upgrade for the Xoom tablet. The latest Nenamark benchmark suggests that the Droid Bionic would be released with Android 2.3 Gingerbread, a qHD display, and a processor powered by Texas Instruments.

What’s curious and notable about the benchmark is that it reveals a PowerVR 540 GPU, which Droid-Life says “matches up to the new TI OMAP 4430 and 4440 dual-core processors.”

There were prior rumors that the reason for the Droid Bionic delay is that Motorola couldn’t get the Tegra 2 chipset to operate on Verizon’s 4G LTE network, and that the NVIDIA-made applications processor caused some radio frequency interference with the mobile broadband radio.

Since Motorola had debuted the Motorola Droid Bionic at the Consumer Electronics Show, as one of Verizon’s 4 new 4G LTE handsets, the device has sparked some controversy around the internal processor that was used.

At the show, a Motorola representative had informed me that the chip inside the Droid Bionic is actually a TI OMAP chip that’s dual-core, not a Tegra 2 chip that was found in the Motorola Atrix 4G for AT&T and the Motorola Xoom tablet. Since the show ended, Motorola had been quiet and various tech blogs have reported that the device will ship with a Tegra 2 processor, which is a dual-core ARM-based processor from NVIDIA with the company’s GeForce graphics engine. A few GottaBeMobile readers were adamant that my reporting on the TI OMAP CPU was incorrect.

In March, when I had visited Orlando, Florida for the CTIA trade show, I had asked Motorola PR reps on hand. They had said that they had not publicly released what the core was inside the Droid Bionic, and whatever information I had gotten was unauthorized and they cannot validate the accuracy of that information. They said that the chipset inside was not important and that the device will come with an unspecified dual-core CPU. However, in my conversation afterwards with NVIDIA executives at CTIA, they had informed me that the Droid Bionic does in fact use the dual-core Tegra 2 CPU.

Now, two months after CTIA and the first official benchmarks are revealed online, and that benchmark shows that the Droid Bionic does in fact confirm information from my initial report–that it comes with a dual-core OMAP processor made by Texas Instruments. That information is contrary to the March statement given by NVIDIA executives, however.

Given the latest benchmark information, it’s unclear if at CES in January if Motorola had finalized the chipset, was really pushing for a Tegra 2 chipset, or was at the time mulling to switching to a TI OMAP chip. Motorola had enjoyed a good relationship with Texas Instruments on previous generation high-end devices. Both its Droid 1, Droid X, and its Droid 2 series (Droid 2, Droid 2 Special R2D2 Edition, and Droid 2 Global) all ship with TI OMAP chips, which are based on the ARM architecture. If the latest Nenamark benchmark is accurate, it would indicate that Motorola is returning to its TI relationship.

The number from the benchmark, however, is curious, as it appears that someone had begun to benchmark the device, but stopped the benchmarking halfway through, giving it a score of just 24.0 flat. In comparison, the leaked Droid 3 benchmark reveals a score of almost double that at 44.20.

Nenamark reveals that the device also has a qHD display, which may be the same 4.3-inch screen as on the Droid X2, along with Android 2.3.3 Gingerbread, which unfortunately isn’t the 2.3.4 that will support video chat.