Having rode earlier waves of Amiibo to success and shown that there’s even more money to be made in the toys-to-life category of games than anyone thought possible, video game maker Nintendo is sharing more new Amiibo release date details including what characters are coming and when they’ll be available for purchase.

Nintendo revealed more Amiibo release details this morning in a press release, just weeks before its new set of characters are slated to arrive. Amiibo are relatively small figures that can have a big impact on gameplay in some of Nintendo’s most famous franchises. Each figure is equipped with an NFC or near-field communications chip that’s able to unlock different pieces of content when pressed against Nintendo’s consoles. 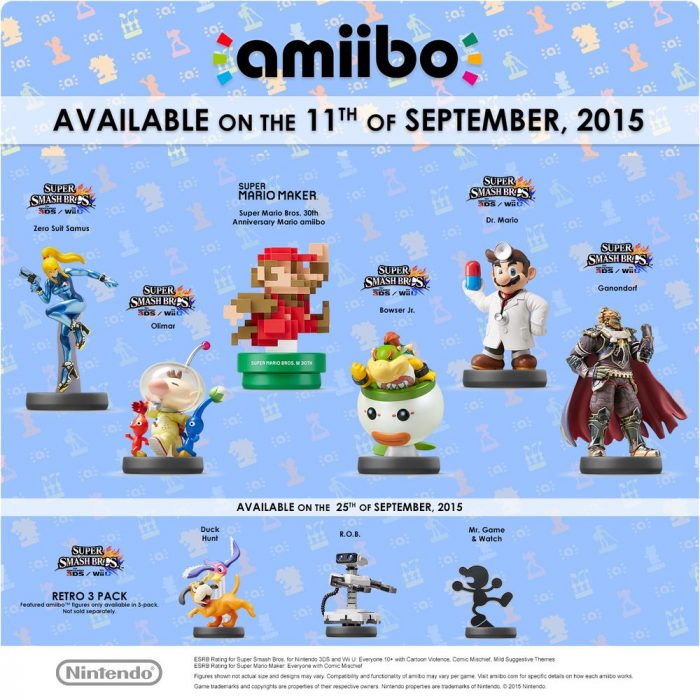 The first round of new Amiibo figures will hit store shelves on September 11th. As it has with past waves, Nintendo has stuffed this wave full of characters from across its portfolio of tiles. Zero Suite Samus, Olimar, Dr. Mario, Bowser Jr and Ganondorf figures are all coming. All of these are for Super Smash Bros. Wii U and Super Smash Bros. 3DS. Nintendo has a special Super Mario Maker Amiibo in both red and blue coming, but details on it remain hard to come by.

As if this first wave wasn’t enough, Nintendo has a second new Amiibo release date planned for later in September. This second wave of figures will introduce Duck Hunt, Rob and Mr. Game & Watch. All three are a part of the Retro 3 Back. All three of these figures of for Super Smash Bros. Wii U and Super Smash Bros. 3DS.

Originally, there was a separate set of figures coming based on Mii Fighters, but those have been given their own release window in November instead of having to compete with the figures that are already set. Information about the Falco Amiibo figure is hard to come by too, with Nintendo now saying users can expect it sometime this holiday season.

Nintendo doesn’t make it clear why it’s delaying some figures, but some are speculating that the change in release schedules and line-up is directly related to the shortages gripping Amiibo figures. Launches last year and earlier this year were plagued by lack of Amiibo stock. What’s worse, things seemingly haven’t improved ever since Nintendo addressed the issue in statements. There are some characters that are still very, very difficult to find. Nintendo has sold millions of the figures to date, with no signs of sales slowing down anytime soon.

Buying an Amiibo is like investing in downloadable content, only users get a physical character for their trouble. Besides adding cool features in some games, Nintendo expands the footprint of some figures, unlocking some content in multiple games. The Nintendo Wii U and new Nintendo 3DS both have support for Amiibo figures built in. Users with older consoles can purchase an Amiibo reader accessory to make use of their figures.

Unfortunately for release date buyers, these new Amiibo figures aren’t yet available for pre-order on Amazon. Video game retailer GameStop isn’t taking pre-orders ahead of this new Amiibo release date yet either. Presumably Nintendo and its retail partners are still working on how best to offer this wave of figures in a way that doesn’t frustrate fans.

Read: 2015 Skylanders Superchargers: What You Need to Know

These aren’t the only Nintendo Amiibo figures set for release in the next month or so. At E3 2015 video game maker Activision revealed that the Skylanders Superchargers Starter Pack that it plans to sell for the Wii U will come complete with two exclusive figures that can be used as Amiibo by just rotating their base.