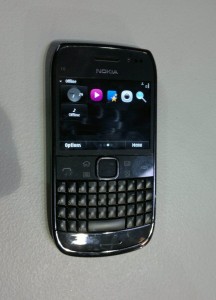 Nokia has had several popular and affordable BlackBerry-style phones with front-facing keyboards over the years, including the E71 series–which also was subsidized on AT&T as the E71x, the E72, and the E73 Mode available through T-Mobile USA. The latest one, the E6, will bring subtle refinements to this popular form factor that offers business and messaging customers the convenience of an exposed keyboard without having to deal with a sliding form factor.

Like other recent Nokia smartphones–including the Nokia N8, E7, and the rumored C7 for T-Mobile USA–the E6 will also feature the more modern Symbian^3 OS, which features customizable home screens, widgets, and larger icons that were geared towards touch interfaces. The display is also said to be touch-enabled like BlackBerry Curve Touch, which means that in addition to providing a navigation option via hardware controls–such as the keyboard and directional pad–users can interact with the Symbian^3 OS directly from the screen.

The screen resolution will be updated as well. This is a welcomed change as current phones with the form factor, including the E5, still sports the same QVGA resolution of the E71 released several years ago. By moving to VGA resolution, Nokia will affectively increase the pixel count by four times to give users sharper resolutions for both text and images displayed on the screen. What should be pointed out, also, in the leaked image of the E6 is the rich black that’s on the screen, which suggests that Nokia may be migrating this phone to the Clear Black Display technology, also used on the AMOLED displays of the Nokia E7 phone. With a deep black, colors will pop out more.

Given these new features, the Nokia E6 will provide this form factor with the most significant improvements since Nokia had debuted the E71.

The E71 was a popular phone when it was released a few years ago. AT&T offered the device alongside the Windows Mobile non-touch Samsung Jack, and the E71x on the carrier offered a much better build quality consisting of metal parts compared to the Korean-made rival. The device is both slimmer and more narrow than the Jack and other BlackBerry devices. According to Nokia, this is better for one-handed usability as it’s easier to reach over with your thumb while gripping the device compared to wider form factors. Also, since the keys provide a nice dome to them, using the E series candybar QWERTY devices provide for a nice, accurate typing experience despite having a more cramped keyboard as the dome-shaped keys help to improve usability. From the leaked images, it seems that the E6 will continue with that tradition.

The important thing to look for in the E6 is whether or not Nokia has optimized Symbian^3 or provided the device with a faster CPU. While I truly adore and love the Nokia N8 for its solid build quality, superb hardware, and Nokia’s Scandinavian design, the device lagged a little if you’re running multiple apps or running memory-intensive apps. For a business-class device, the E6 will have to improve on this aspect to attract corporate customers to the device.

Since AT&T had offered the Nokia E71x, it’s unclear if several years later the E6 will be a compelling enough device and experience to give Nokia traction in the U.S. market when carriers are turning their attention towards full touchscreen devices running Android and iOS; even RIM is losing market share with BlackBerry devices.