The Battlefield Hardline release date is still a month away, but already users are getting hyped for the games’ release. Late last week, developer Visceral Games set the tone for this week’s Battlefield Hardline beta release with a look at the features and thrills users can expect in the game’s multiplayer. 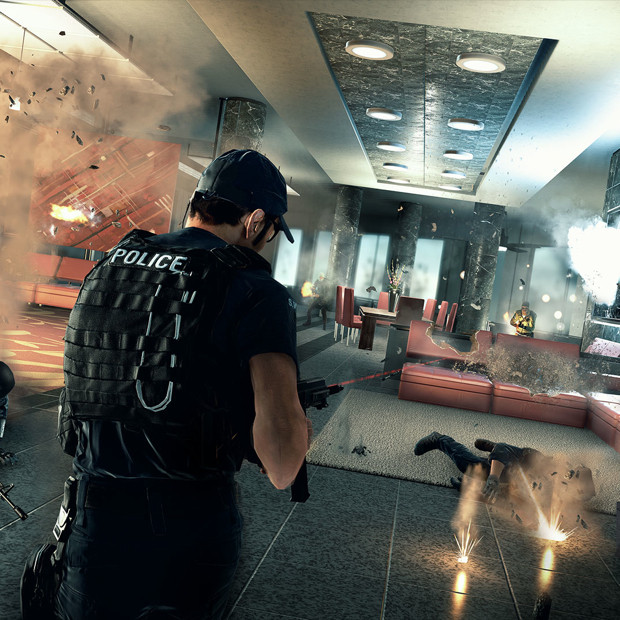 Hotwire sounds a lot like the Capture the Flag modes from other first-person shooters. In Hotwire teams will be tasked with stealing cars and managing to hang on to them while an opposing team tries to stop them. Visceral is promising what it calls “Only in Battlefield moments” with this mode. Heist, involves player successfully pulling off a bank heist or preventing one. Both game types highlight the distinctions between playing as a member of law enforcement or a criminal. It’s a unique take on first-person multiplayer shooters to say the least.

There are lots of different things that go into a multiplayer experience. Some of these, are things you’d expect like good scenery and a good set of weapons. In the Battlefield Hardline beta coming tomorrow players will get to test Viceral’s theories on map-size being another important multiplayer element. The developer said it focused on creating medium size spaces to keep down on travel time. It’s hoping to strike what it calls a “fun sandbox style experience” rather than a typical Battlefield war experience that takes a lot more landscape. It’s risky, but cutting down on travel time is good thing. In theory, player should be able to get right back to the action with minimal effort.

Visceral is hoping to strike a cop drama tone similar to television shows like Law & Order with the Battlefield Hardline campaign too.

It’s very important that all of these different changes and features make a solid multiplayer experience. A successful Battlefield Hardline beta could breathe new life into one of gaming’s biggest franchises at a time when it needs it the most. Before Assassin’s Creed Unity became world famous for its glitches there was Battlefield 4. It took months for its developers to sort out its online issues. But the time they had, gamers had already moved on to the next franchise.

Read: Details on How to Play the Battlefield Hardline Beta Arrive

Last week, Electronic Arts and Visceral finally revealed the Battlefield Hardline details gamers were waiting for. The Battlefield Hardline beta won’t require users to pre-order the game or purchase another. The Xbox One, Xbox 360, PS4 and PS3 stores will offer a version of the beta to download for their users. The Xbox 360 and PS3 versions will take up around 4GB of space, with the current generation and Windows PC versions taking up around 10GB of the free space on those console’s hard drive. It doesn’t appear as if Xbox One and PS4 owners will be able to pre-load the game before the beta kicks off. PC users do have the option to pre-load through Electronic Art’s Origin PC gaming service.

The Battlefield Hardline beta release is tomorrow, but the final game won’t launch on the PC, Xbox One, Xbox 360, PS3 and PS4 until March 17th in the North America and March 19th in Europe. When it does a basic version of the game will cost buyers $60.