Sony’s PS4 video game console doesn’t come with a high-end gaming headset, but those who take advantage of a new PS4 deal at Best Buy will get one anyway with their purchase. This deal comes just in time enough for MLB: The Show 15’s release on March 31st.

The terms of this new PS4 deal are pretty simple. Anyone who purchases Sony’s PS4 from Best Buy’s website receives a free Sliver Wired Stereo Headset. Best Buy adds the headset to shopper’s digital purchases, then issues a coupon to cover the cost of the accessory. To be clear, this doesn’t seem to be a widespread PS4 deal, just something that Best Buy is offering specifically to its own customers as incentive to buy with it and not another retailer. 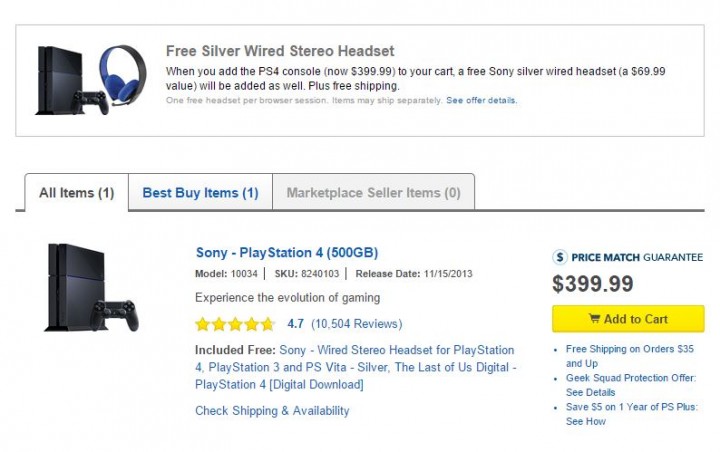 $37 might not sound like much in the way of savings, but you have to take a look at user’s full investment in a console to appreciate what you’re getting in this new PS4 deal. Normally, users purchase a console and then add more compatible accessories over time. It’s why most households only start out with a single controller and a few games. Breaking out those smaller purchases sort of hides how much you’re actually investing in your gaming experience. Purchasing this PS4 bundle now means you won’t have to invest in a wired headset in the future. What’s more, the Silver Wired Stereo Headset is compatible with the PS Vita, PS3, PCs and any other device that has a standard headset jack, like the iPhone 6.

This PS4 deal is also important because it’s one of the few ways potential PS4 buyers can save right now. The PS4 launched in November 2013. Included in the box was just a single controller, free trials for Sony’s music and online gaming services, a power cable, a HDMI cable, a USB charging cable for the controller and a wired mono headset. That’s exactly what users still get for $399 today even though Microsoft has cut the price of its Xbox One console to $399 and offered an additional $50 in savings on a limited basis. Today, you can pick up a PS4 with a copy of The Last of Us Remastered, but that’s about it. Separately, that game would cost $49.99.

If PS4 deals like this don’t continue to surface Sony could see sales slow as new buyers evaluate whether it’s a better idea to purchase the Xbox One at $349 instead of the PS4 at $399.

Best Buy does say that this PS4 deal only lasts while they still have the PS4 and Silver Wired Headsets in stock. It also says that it’ll ship the headset free of charge. It doesn’t list a hard date for when this PS4 deal will end.