The iPad has dominated sales of mind-range tablets for some time, but if recent rumors are correct Microsoft is preparing to throw absolutely everything it has in its arsenal at conquering Apple’s tablets. Rumors now indicate that Microsoft is preparing to launch not just one but two Surface tablets, and one of those Surface tablets will reportedly, include a processor made by Intel.

Bloomberg was the first to report that Microsoft was planning to unveil more than just a Surface Mini tablet with an ARM processor at its event on May 20th. The Intel-powered Surface form factor of the device remains unclear. As such, we don’t know if this Intel powered Surface tablet will feature a larger or smaller display than the 7-inch to 8-inch display that’s been rumored for the Surface Mini. 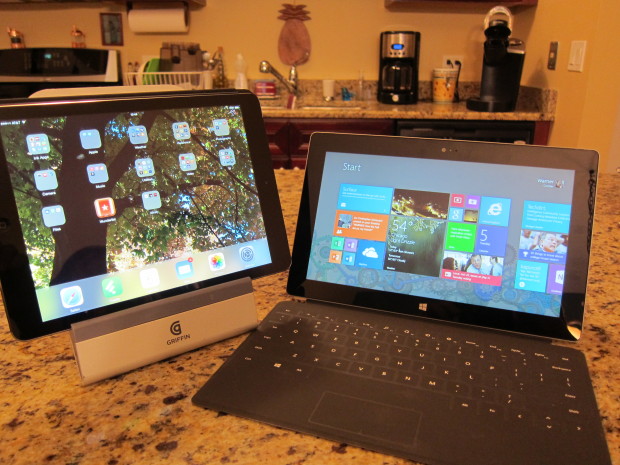 The iPad Air and the Surface 2

It’s that detail that’s key to Microsoft’s current situation. Currently, the company offers a Surface Pro 2 tablet that includes an Intel processor so that users can install Desktop applications like iTunes instead of relying solely on the Windows Store. While well received by reviewers, the Surface Pro 2 is decidedly a professional tool that costs as much an ultrabook. It also has a fan that can be heard when the tablet is doing some serious processing. Users want to install Desktop apps but Microsoft’s asking price for the Surface Pro 2 is too high for the average user at $899.

For those who don’t mind installing apps from the Windows Store there’s the ARM-powered Surface 2 tablet. Like the Surface Pro 2, it also features a 10-inch display but its ARM processor gives it longer battery life. It also takes away any access users might have to apps downloaded through the web browser. In fact, users can’t install apps on it from anywhere else but Microsoft’s own Windows Store. It starts at $449.

ARM processors are at the heart of most of the world’s smartphones and tablets. Interestingly enough, the report specifically mentions that “people who asked not to be identified” noted that Microsoft would be releasing “other new Surface models.” If this source is accurate than Microsoft could surprise users with even more than the two tablets industry watchers are expecting it to reveal at this May 20th event. How those devices would compare to the current Surface, Surface Pro, Surface Pro 2 and the rumored Surface Mini remains unclear.

What is clear is that Microsoft is determined to build a stable army of self-made tablets that compete directly against the iPad Air, iPad Mini,and cheap Chromebook laptops . Of course, its decision to buy Nokia’s entire Devices & Services Division late last year also confirmed Microsoft’s was serious about its plan to move into the hardware space as well.

If this rumored Intel-powered Surface is true than there’s no way that Microsoft doesn’t price it competitively against other mid-range to low-end tablets. Today, Microsoft’s Windows 8 operating system comes installed on dozens of 7-inch tablets that are really made for enjoying entertainment and getting work done without necessarily having to switch to a different device. Unfortunately, most of these tablets don’t include a digitizer for taking notes or drawing with more precision than what is possible on the iPad. Many of them also don’t come with full-size USB ports so that users can plug them into the printers, joysticks, mice and controllers they already have around their home. So far, all four Surface tablets have and Microsoft has included a Mini Display port so that users can pair the tablets with a monitor and take advantage of some extra screen real-estate.

With this new Surface entry, Microsoft could, presumably, squeeze the life out of iPad sales at multiple pricing levels. It’s possible that an Intel powered Surface might boost Microsoft’s chances of stopping Google’s Android operating system from completely dominating tablet sales as well.

To get there Microsoft has already made changes to the way Windows tablets treat storage and lowered the price that device makers like Dell, HP and Lenovo pay it to load Windows on their devices. It’s also shocked industry insiders when it decided to make Windows 8 free for all devices that have a screen smaller than 9 inches. Most Windows 8 tablets now also include a free copy of Microsoft’s Office Home & Student productivity suite. Consisting of Word, Power Point, Excel and an upgraded version of OneNote, just a few years ago that software would have cost all users at least $139.99.

Interestingly enough, none of these reports have included so much as a hint about what Microsoft plans to do with Nokia’s family of devices. Some have speculated that Microsoft is preparing to use its newly Nokia assets to create a Surface branded phone. There’s no concrete evidence on that yet. There’s no word yet on what Microsoft plans to do with the Lumia 2520 tablet that Nokia unveiled late last year either. It uses an ARM processor and is unable to run Desktops for the same reason that the Surface and Surface 2 can’t.