In the latest two editions of the ‘Scroogled’ ad campaign – a concerted effort by the company to make users aware of what it sees as privacy violations committed by Google – Microsoft forgoes its attack on Google’s search engine and focuses on Android instead.

The first of the new ads, which debuted this week, outright accuses Google of leaking information about users who download applications from the Google Play Store for Android. According to Microsoft, every time a user purchases any application from Google Play, Google notifies the developer via email of the purchaser’s information without warning the customer that they’re sharing the information first. This information, again according to Microsoft, includes the customer’s full name, email address, and neighborhood (information that any online store would give to a seller about someone purchasing an app). 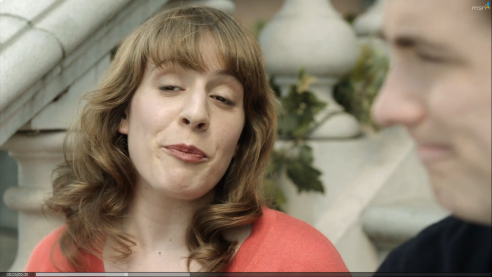 The ad also implies that developers could easily use the information that Google is providing, along with a user’s app purchases, to discern information that users didn’t explicitly give them. Microsoft points to health related applications as an example.

Following these accusations, Microsoft points out that privacy groups, and even the United States Congress, are investigating cases of consumers getting “scroogled.” The add ends with the narrator pointing out that Microsoft’s own Windows Phone operating system and accompanying app store, don’t commit these same privacy violations.

The ad’s claims of Google Play security align with the developers we talked with. However, only insomuch as this is the same information that would be shared with any online seller, such as Amazon and Etsy. It appears Microsoft’s only argument is that this practice isn’t disclosed first. The second ad also focuses on the Google Play Store, but features a couple sitting outside their house using a Microsoft Surface and discussing the topic.

Google is currently under investigation by the United States Government over privacy concerns. These particular investigations stem from the way Google’s services collect information, as opposed to any alleged distribution of data. As reported by CNME, Google has come under investigation in Europe for its recently updated Privacy Policy. Regulators in France, Germany, Italy, the Netherlands, Spain and the United Kingdom all are looking into how the company’s new Privacy Policy is being implemented. These investigations stem from a European Data Protection Directive that was interpreted by each countries’ regulators differently. Though, each country does have concerns, the exact nature of these concerns hasn’t been shared due to a policy to not comment on ongoing investigations. Google’s StreetView product, now available on the company’s website, Android devices, and Apple’s iPhone via the Google Apps map that launched last year, has also come under scrutiny in places in Europe where privacy is more of a concern than it is in the United States.

The ad hasn’t aired on television, but is part of a larger website and ongoing campaign to win over users from Google products by painting the company as loose with user’s data. The first ad in the series focused on Google search collecting data about users, while the second ad discussed how advertisements on Gmail scanned users’ emails in order to present users with relevant advertisements.