Lucky Clan’s SlowCam allows users with an iPhone 5 or above to record video clips at 60 frames per second, so that they can create video highlights and reels of touching family moments. The app, which is available in the iTunes App Store for just $1.99, also allows users with the iPhone 5 or above to configure focusing, exposure times, and render videos with other apps open.

Video clips taken with the application are saved to the iOS 7 camera roll so that users can immediately access their clips for other iOS applications too.

As user reviews for the application confirm, SlowCam won’t suddenly endow the iPhone 4s and iPhone 4 with slow-motion capture capability. Unfortunately neither of those devices have the camera technology that it would take to capture usable slow-motion videos like the iPhone 5 and iPhone 5s do. 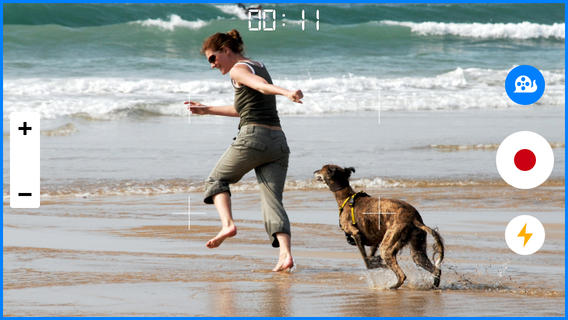 Read: How to Capture Slo-Mo Video on the iPhone 5s

Apple announced that the iPhone 5s would include an upgraded camera sensor that allows for high-speed video capturing at its iPhone event in September. While the feature isn’t necessarily new to smartphone cameras — users with the Samsung Galaxy S4 and the HTC One have had it for months — it does, finally bring the feature to Apple’s massive smartphone audience. Unlike Samsung’s and HTC’s slow-motion options, Apple’s isn’t buried under a sea of menus and other camera options. As such, users are more likely to use it simply because they can actually find it.

Apple’s iOS puts the feature front and center, almost guaranteeing that users of its iPhone 5s will capture more videos with iOS 7’s slow motion camera options than users of other devices.