Verizon Wireless is beginning to deploy a new firmware update for the 4G LTE HTC Rezound smartphone, which was the first device to debut with Beats Audio, 4G LTE, and a 720p HD high resolution display. Though considered a minor software update, the update, delivered to users over the air, brings a number of welcomed bug fixes.

Some of the more noticeable features that this update delivers include better audio call quality, updated signal strength display, stability for the People app, and overall device stability that will reduce forced closes and reboots required. Additionally, other features fixed include WiFi connectivity, task manager, mail processes, and mobile hotspot stability. The fix for the mobile hotspot feature will be a welcomed one for users who use their smartphones to tether, sharing their Internet connectivity on Verizon’s network with other WiFi-enabled devices. The fix now eliminates issues where the Internet connection stalled in the past when multiple users are connected to the same device. 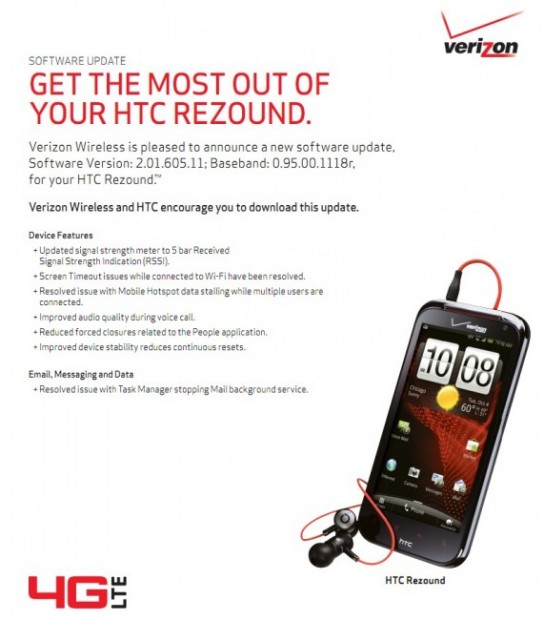 Verizon’s staggering the roll-out right now for the update so some users may see the update appear on their handsets ahead of others. The update is available over the air.