The Top Gear team is heading to Amazon for a new show featuring Jeremy Clarkson, Richard Hammond and James May. After rumors that a Top Gear replacement was on the way to Netflix, Clarkson broke the news this morning that the team is back together for a new show on Amazon Instant Video.

After a fracas that resulted in a suspension earlier this year Clarkson was out of a job and the Hammond and May did not continue Top Gear without him.

James May sums up the new show best in a single tweet telling fans, “Ive got a job with @AmazonVideoUK. Bad news! So have the other two.” 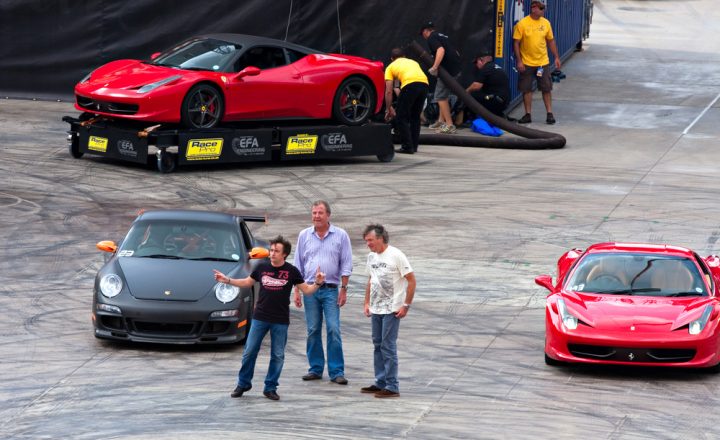 There is an Amazon Top Gear replacement featuring the famous trio of hosts and drivers. Daleen Loest / Shutterstock.com

Since the Top Gear cancellation on BBC the team started a traveling show to deliver their comedic and spot on car commentary in live shows across the world.

Here is a fast look at what Top Gear fans need to know about the new James May, Richard Hammond and Jeremy Clarkson Amazon TV show. Drive2Prime is not the name of the new show.

No Name for the Top Gear Team’s Amazon Show Yet

This morning Amazon confirmed the show as did tweets from the trio of entertainers, but there is no official name for the series yet. It is unlikely that it will carry the Top Gear name, even if that is what fans may call it until further details arrive.

What Will the Top Gear Group’s Show Be About?

We do know that this is an unscripted show about cars, and not some new type of cooking show or UK Dr. Phil type show — so you can count on seeing the team behind the wheel soon.

[email protected] now saying I can't be their chief drone pilot. Apparently they want us to make a car show.

From the Amazon announcement we know that,

“Jeremy Clarkson, Richard Hammond and James May are reuniting to create an all-new car show, exclusively for Amazon Prime. The show will be produced by the trio’s long time executive producer Andy Wilman.”

The good news here is that the three entertainers are back and the producer who helped craft Top Gear with the trio is on board as well.

When Can You Watch the New Top Gear on Amazon?

I'm very excited to announce that Hammond, May and I have signed a deal with .@AmazonVideo

The first shows will air online in 2016 on Amazon Instant Video. There is no exact date at this time, and we may not see more details on the release date for the first show for some time.

Can I Watch the Amazon Top Gear Replacement in the U.S.?

All of the announcements about the show come from the trio and from Amazon UK. This led to concern that the show will not appear on Amazon Instant Video in the U.S., but Amazon quickly answered that.

@3gingersmom The show will be on Amazon Prime in the U.S.

When the new show arrives on Amazon Instant video, the episodes will be available on Amazon in the U.S. as well as in the UK.

Amazon is not going to make users buy episodes of the Top Gear trio’s new show individually, but you will only be able to watch on Amazon.

The show will join other Amazon series as an exclusive original TV series that is available free with an Amazon Prime membership. Amazon allows users to stream Amazon Instant Video, and some are available to download.