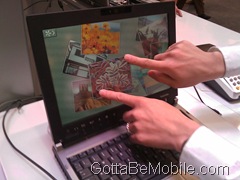 We brought you news on Saturday about Toshiba’s M750 prototype with Wacom’s Capacitive Touch digitizer being demoed (video and pictures!!). Shogmaster is telling us that Toshiba is NOT planning on including the active digitizer EMR in the capacitive touch solution, which means a pen won’t be included and you won’t be able to ink. This would be the WRONG decision, Toshiba, and we hope that this is just an accidental miscue in your product plans. Am I right, Tablet PC community?

Bad news guys. Despite the picture of the Device Manager, it did NOT have the active EMG digitizer in it. They DON’T have plans to include both, which I promptly freaked out over and drew surprised reaction from the poor Toshiba Engineer from the video (yes, the chap accidentally giving us the middle finger throughout the video).

Perhaps my reaction will change their minds, but so far, I’m not so sure about their plans with capacitive touch.