EA, and developer DICE, want to make smartphones and tablets integral to the Battlefield 4 experience, both during the game and on the go.

A new trailer for the upcoming Battlefield 4 shows the new Battlelog app for iOS (and presumably Android) that will show players game information no matter where they are. The app can give players information about their game state, or their friend’s stats, even when they’re not playing the game.

The app also includes a server browser so gamers can see what servers their friends are on, or just find a server they want to join when they start up the game.

When they’re inside the game gamers can use the Battlefield 4 Battlelog app to change their load outs in between spawns or easily switch servers without going through clunky menus on the game itself. Tablets can even double as a mini-map for the game, giving players a larger, more detailed overview of the battle. In mini-map mode players can set waypoints and signify objectives on their tablet with just a few taps so their team can see where to go next. 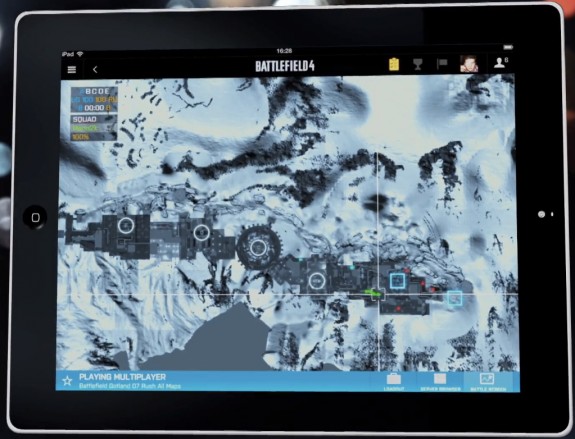 Battlefield 4 will come to the Xbox 360, PlayStation 3 and PC on October 29. The game will also come to the PlayStation 4 and Xbox One when those consoles launch. The next generation version of the game will feature enhanced graphics and the ability to play with more players online in a single match.

The military shooter is just one of many games coming to next generation consoles to feature unique second screen experiences. Upcoming games like The Division and Need For Speed: Rivals will also have smartphone and tablet apps that will let players interact with the game when away from their console.