We could be just days away from the official unveiling of the MOGA Ace Power controller for the iPhone 5s and other iPhones running Apple’s iOS 7 operating system. At least, that’s if the video leak and rumors that surfaced this weekend are an accurate indication of MOGA’s launch plans.

Thanks to leaked specifications provided by the @evleaks Twitter account last week, there aren’t any features included in the YouTube video that will come as a shock to users keeping up with the latest in iOS 7 controller developments.

In the video, a pair of hands are seen connecting to the MOGA Ace Power by extending its side, then placing an iPhone 5 into the dockable area before sliding it all together. The video does indicate that users can expect buttons that deliver a “precision” controlling experience, however it doesn’t exactly share any details about how the MOGA Ace Power is able to deliver a more accurate experience than upcoming rivals. 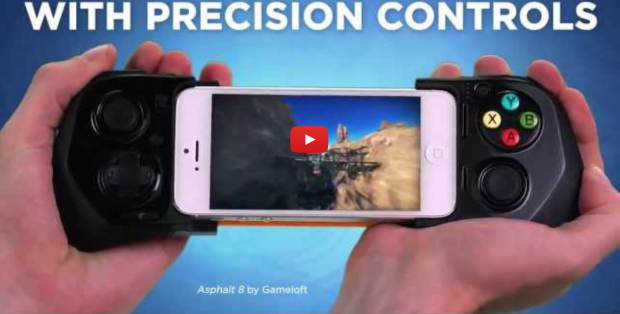 The video does confirm Evleaks’ claims that the controller will include a built-in battery to allow for marathon gaming sessions. This YouTube video officially brands this battery charging functionality as Moga Boost Technology saying, “[it] extends your phone’s battery life.” The video doesn’t say by how much it extends battery life. It also doesn’t indicate if the controller itself is rechargeable or requires batteries.

The promotional video does show a user removing their iPhone 5 and collapsing both sides of the controller in on itself while showcasing the various buttons, joysticks and triggers around the controller’s surface.

The video indicates that the MOGA Ace Power is only compatible with the iPhone 5s, iPhone 5c, iPhone 5 and the iPod touch. As such, users with older devices that run iOS 7, like the iPhone 4 and the iPhone 4s, are out of luck. Both of those devices use the old Apple Dock Connector port instead of the more modern Lightning connector.

When the controller will launch is still up for some debate with some rumors point to a mid-November launch. Rumors originating from The Verge indicate that MOGA Ace Power will cost users $99.