While modern cellular phones and smartphones have essentially replaced the need for pay phones, New York City isn’t entirely giving up on the concept of a communal communications terminal. Manhattan will be replacing its old pay phone booths with new booths that feature Internet connectivity and smart screens that will give visitors and locals access to neighborhood information, traffic information, safety alerts, and local business information.

The pilot program will convert 250 existing phone booths to ones that will eschew the aging wired line pay phones with 32-inch smart screens. 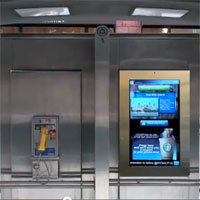 If the response is positive, the city could potentially expand the program to include newer, more modern connectivity services, such as providing WiFi hotspot, allowing users to log into their own email accounts on the smart screens, and Skype with others. It looks like the phone–as we knew it–has been replaced by Skype. As voice as getting replaced by data–even on mobile phones–offering cheap, affordable pay-to-use mobile hotspot, or even ad-supported hotspot services, may be beneficial to tourists and locals.

According to Phone Arena, these screens will be powered by advertising and will not cost the city anything. NYC will be able to get a 36 percent cut on advertising. It’s unclear how this amount compares to the $18 million annually that the city gets from pay phone revenues and advertisements.

Essentially, the smart screens will serve as a public tablet for consumption of information at launch. For those who may be wary about germs, the city wants you to know that the tablets are dust-proof and waterproof and could be cleaned with a hose.