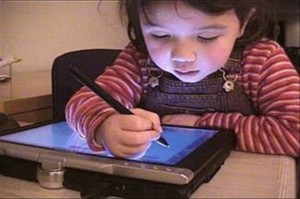 I think if Rob, or Dennis, or Sumocat, or just about any other Tablet PC blogger said it, we said it about a bazillion times back in the day. Put Tablet PCs in the hands of children and you’ll find out why these devices are the wave of the future. Children don’t have preconceptions when you put something new in front of them, and as we’re seeing with iPads and other Tablets today, when you put one in their hands, they figure it out pretty quickly. The same thing happened with Tablet PCs back in the day.

A recent Cult of Mac post, Why Every Child in America Needs an iPad, makes similar points, and also advocates that this is a good way to un-tether a child from that well known baby sitter, the TV. The post also points up some of the controversy that comes with this as iPads start to proliferate, and I guess you could say that the leading anecdote of seeing a small child in a restaurant watching a movie might point up that this could just be replacing one electronic babysitter with another.

That said, the post lists a number of reasons why iPads and Tablets make sense for kids. I’ll just say this: regardless of the concerns about whether or not these kinds of devices are suitable substitutions for children, how children take to and relate to new technology that make us adults give pause and think before we begin playing with them is a big telling point into whether or not the device, gadget, or technology will succeed.

If you’d like you can scroll through some of the posts about Kids and Tablets PCs that can be found at this link.