Newsstand: Are You Reading More Magazines on iOS 5?

One of the new features in iOS 5 is the Newsstand. This new folder sits on your home screen, and brings your digital magazine and news subscriptions front and center. While not as sexy as the notification center or Siri, Newstand is helping publishers sell more subscriptions.

Conde Nast reports that subscriptions jumped 248% for publications like GQ and The New Yorker. Single issue purchases also climbed to 142% in the wake of iOS 5 and Newsstand.

It’s not surprising to see that more users are purchasing magazine subscriptions on the iPad. As Ray notes, the Newsstand is out front, and cannot be removed. 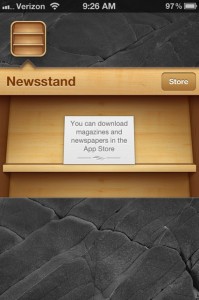 If you see Newsstand on your iPhone or iPad for the first time, Apple kindly tells you that, “You can download magazines and newspapers in the App Store.” Clicking this message takes you right into the App Store to make a purchase.

By putting the Newsstand in this location, Apple has raised awareness of subscriptions. Apple has also added background downloads, which is a huge deal.

I have been a subscriber to WIRED since they started taking iPad subscriptions, but too often I fell behind in reading because I never planned to download the new issue. The large downloads often took too long to download.

I was pleasantly surprised to see that the latest issue was downloaded the same day WIRED hit my mailbox (It was cheaper to get a paper and a digital subscription, than purchase through the app).

The only remaining issue I have with reading magazines in iOS 5, and with Newsstand, is that not every magazine can be read on the iPhone and iPad. Currently, WIRED is not available on the iPhone. While the screen is much smaller, I would still like the option to read some articles on the go.

Have you discovered digital magazine subscriptions on your iPhone or iPad for the first time? What do you think of the experience? Or, are you like me, and just enjoying the new background downloading?