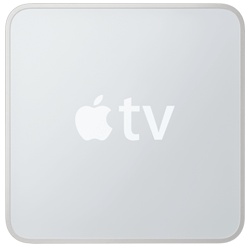 According to Engadget, the next iteration of Apple TV will shift further away from being a crippled Mac and much closer to being, well, a crippled iPhone. Might sound like a downgrade, but here’s the kicker – they’re aiming for a price-point of $99. Better, right? Maybe but there are still key questions to be answered.

Per a source Engadget claims is close to the product, the new Apple TV will run the A4 system-0n-a-chip, same as the iPad (and presumably next iPhone), be limited to 16GB of storage but reliant on cloud storage (and possibly storage on your Time Machine and/or Mac), and output 1080p. It will also be a headless unit (no display) possibly with only ports for power and video output, though I’d be surprised if Apple didn’t include their standard iDevice dock connector. Sounds reasonable to me, and this rumor is in line with Apple’s search for someone to expand its line of products running the iPhone OS. Apple TV is practically begging for an overhaul as an iPhone OS device, which frankly isn’t much more than an iPod with video-out capabilities. And of course, we should expect a response to Google TV.

The big questions for me are how will it be controlled and what kind of apps will it run? Using that minimalist Apple TV remote, don’t expect to get any functionality beyond what the current version offers. I would expect, however, the main intent would be to control if via another iDevice, like the current version can be controlled with the Remote app except better.

Along with that, I have to ask what kind of apps people would run on it. Video apps, like Netflix, are obvious, but will they be aiming for games too? What about productivity? I would classify this rumor as being highly likely, but the lingering questions keep me from getting too worked up about it either way.