A device with a codename of Samsung TE4 was recently spotted using Rightware benchmarking technology with some new hardware under the hood. In particular, the device was shown running a dual-core ARM Cortex A15 processor clocked at 1.7 GHz with a new Malu T604 GPU.

Android and Me is reporting that one potential for Samsung TE4 would be in a future Google-branded Nexus product. Samsung had been the selected Nexus manufacturing partner for the Nexus S and the Galaxy Nexus recently. 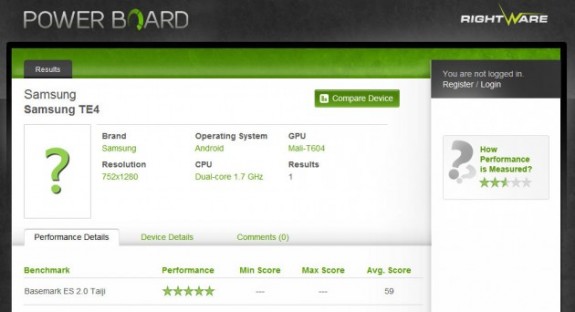 In the past, Samsung has proclaimed that it would be among the first to offer a new chipset based on ARM Holdings’ A15 reference design. Potentially, the dual-core A15 CPU may be the latest efforts by Samsung. The chipset and the clock speed being reported by Rightwave matches the Exynos 5250 CPU that Samsung had previously announced.

It’s unclear if the Exynos 5 processor would support LTE. Samsung recently announced that the Galaxy Note II phablet would launch with LTE and the company’s quad-core Exynos CPU, stating that it has made LTE compatible for use with Exynos.

According to the same benchmarks, Phone Arena is reporting that it appears that the device would have a resolution of 1280 X 752. It’s unclear if this would be a larger tablet display, or a smaller display aimed at the smartphone or phablet market.

Most recently, it’s been rumored that Samsung would release a Galaxy S IV smartphone in early 2013 for the Mobile World Congress show, but Samsung had subsequently responded saying that it would not have the Galaxy S III successor ready within that timeframe.

Right now, there isn’t any additional information available regarding the Samsung TE4 hardware nor the Galaxy S IV.