While rumors are heating up for the iPhone 5 and what that device will come with, it appears that Apple is not leaving its venerable touchscreen media player behind as the company is looking to update the iPod Touch with a new design. The iPod Touch and iPhone 5 will be more similar with the next-generation models as both devices will have a metal shell on the rear side. With the iPod Touch, it is speculated that Apple will move to a brushed aluminum back, rather than the glossy and polished aluminum rear that’s employed on today’s models, and the device will share the same 4-inch LCD touchscreen panel with the rumored larger iPhone 5.

Migrating to a brushed aluminum rear would make the iPod Touch less prone to showing scratches on its rear casing. The polished metal surface of today’s iPod Touch readily displays any scratches or abrasions through use. 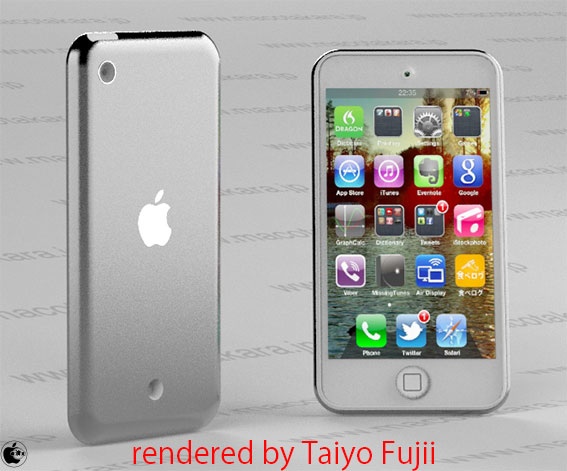 MacRumors is reporting that internally, the iPod Touch will share specs that are on par with the iPhone 4S, including the A5 processor.

According to asian source, new iPod touch (5th generation) will have 4 inch LCD which is the same size with coming iPhone 5.

CPU or other spec is considered to be same with iPhone 4S, and has different back-case design, which will be not mirror polished but buffed alminum one. And it seems to be prepared black and white color model.

With rumors that the next-generation iPhone 5 will be moving towards a smaller 19-pin dock connector from the 30-pin connector on today’s iPhone, it is unclear if the next iPod Touch iteration will share the new dock connector. Likely, Apple will make the shift towards the smaller dock connector for both devices at the same time to avoid confusion when customers try to buy accessories that tap into the dock connector.

The iPhone 5 is most recently speculated to arrive on September 21 and the new iPod Touch could be introduced at that time as well.