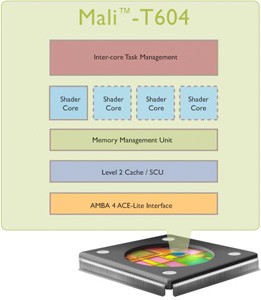 ARM, which is behind many of the smartphone CPU designs, including those in Samsung, Motorola, HTC, and Apple, has released its next-generation Mali embedded graphics processor design. The Mali-T604 will bring support for DirectX, OpenCL, and is designed for general purpose computing. According to the company, the T604 will deliver “up to 5x performance improvement over current Mali graphics processors” and that the “scalable, multicore Mali-T604 GPU raises the performance bar for visual computing in the consumer electronics space, including mobiles, tablets, DTVs and automotive infotainment.” The company says that power-efficiency and performance are key to the Mali-T604 chip:

According to ARM, the T604 architecture will come to Samsung first. Samsung has used ARM designs in its platforms and its Hummingbird CPU, powered at 1 GHz, is an ARM-based chip that the company is using in its Galaxy S series smartphone and Galaxy Tab Android tablet, which had gone on sale today at T-Mobile USA.