Apple announced its new MacBook Pro with Retina Display at WWDC 2012. Apple showed developers a video about the new MacBook Pro during the keynote and just uploaded it to its official YouTube channel. The video provides an overview of the latest MacBook Pro and explains how the company designed it.

The video starts with Jonathan Ives explaining how the MacBook Pro is “without a doubt, the best computer we’ve ever built,” and that Apple designed it with power and portability in mind.

Following Ives’ short introduction, Bob Mansfield explains that Apple “focused on the features that matter most to notebook users” which is why the company put the Retina Display in the Next-Generation MacBook Pro. While he talks about the new laptop, the music for Coldplay’s “Paradise” plays in the background. 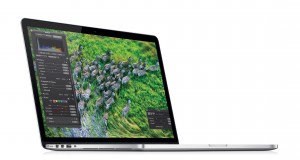 The video shows the big new features of the MacBook Pro, including the Core i7 CPU and Nvidia GeForce 650M GPU that lets Final Cut users view 9 video stream at simultaneously. The video also shows Final Cut playing a 1080p video in a corner with millions more pixels around it, giving video editors a ton of space to for other panes.

The Apple executives take the time to explain that by using non-standard parts Apple is able to build a slim, quiet, powerful laptop. For example, the asymmetrical design of the fans makes the laptop seem quieter than other laptops. Apple was also able to build the display into the unibody design.

Jonathan Ive closes out the video with a tease for future Apple laptops that follow this new design. We wouldn’t be surprised if Apple brings this design and the Retina Display to more Macs in the next year or so.